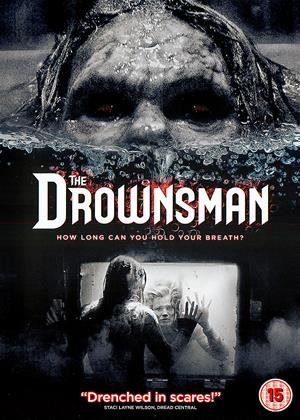 Madison has an acute fear of water, and worries that a vengeful spirit is coming for her. One of her friends admits to another that she has a mental problem. Probably best, then, that these ‘friends’ get together and create a mock séance and challenge any spirits to send a sign that they mean Maddie harm. When a definite sign is sent that harm IS meant, what is the next thing this group of geniuses decide to do? Carry on with the séance, and lower her into a tub of water – where she is grabbed by an unseen spirit that tries to drown her.

In the continuing face of her misery, more people – professionals, this time, and the father of a former victim – tell her her fears are all in her mind. Such stupidity gets instantly frustrating. The darkened creature known as The Drownsman thinks so too, and slowly he begins to attack Madison’s group of friends.

The trouble is, due to his nature, The Drownsman dispatches all his victims in the same manner, so instead of his crimes being depicted as brutal and terrifying, they are rather more relentless and repetitive. Also, Maddie’s extreme aqua-phobia clearly doesn’t extend to an ability to wash herself – she, her clothes and hair are spotless at all times. It’s impossible not to notice this.

This is a competently made, unambitious picture, content to model its scares on the ‘Nightmare on Elm Street’ franchise, with the titular fiend appearing to a group of intense young pretties mainly through their unconsciousness, always involving water. As the creature’s success with claiming the young troupe continues, his original favourite Madison continues to evade him long enough to find out a little of the Drownsman’s past; the ‘terrible sick monster’ was a rapist, who raped Maddie’s mother, which resulted in … Maddie.

There’s a notion that The Drownsman might have been waiting for Maddie so she can take his place, but this is only vaguely hinted at before the credits come crashing in and, in all honesty, it’s difficult to be overly concerned with a character (or characters) who spend most of the film’s running time screaming instead of developing any discernible character.