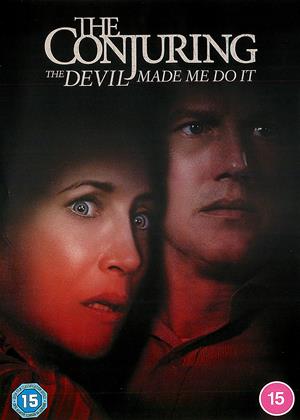 Rent other films like The Conjuring: The Devil Made Me Do It

Reviews (1) of The Conjuring: The Devil Made Me Do It

Corny and unscary - The Conjuring: The Devil Made Me Do It review by AER

The Conjuring 3 - The Devil Made Me Do it promises an interesting court debate of how law courts recognise the presence of God but deny the existence of the devil. Now, I'm not sure I would have wanted a horror film stuck in a courtroom but this interesting debate is sidelined for the usual hokey, corny run around. This time, the dopey psychic Warrens are left to beat around the bushes to shake loose clues as to why and who is targetting unwitting folks in Massachussetts, USA and making them the subject of a demonic curse. It's poorly plotted, riddled with plotholes, lazy character development and clapped-out horror tropes.

There is not a single shred of originality in this film, and the main reason to watch these films (the chills and thrills) are repetitive, unscary and boring.

The Conjuring: The Devil Made Me Do It (aka The Conjuring 3) review by Mark McPherson - Cinema Paradiso

I find it a bit interesting that The Conjuring 3 chose to ditch the number convention and favor a horror subtitle as generic as The Devil Made Me Do It. Because, yes, this is the third Conjuring film and it does indeed continue the paranormal investigations of real-life ghost seekers Ed and Lorraine Warren. The film even takes another step up the timeline by taking place in 1981, being semi-based on the trial of Arne Cheyenne Johnson. So why the subtitle? Perhaps Warner Bros is just prepping for the muddier sequels that will follow and perhaps take bigger liberties with the true tales of hauntings.

The film starts with Ed and Lorraine, once more played by Patrick Wilson and Vera Farmiga, answering the call to help a possessed boy. They bring in a priest and a hectic exorcism is soon underway as the family of the poor boy David Glatzel tries to wrestle the demon out of him. The exorcism isn’t going as according to plan, however, and David’s big brother Arne offers himself as a sacrifice. With the demon out of David, everything seems to return to normal. That is until Arne starts to experience a demonic presence and murders somebody. It’s once more up to Ed & Lorraine to save the day, which will be tougher this time as Ed now has a heart condition and Lorraine is finding herself more conflicted with the past than ever before.

What’s surprising about this entry is how low-key it appears when compared to the rest of The Conjuring universe. There have already been a number of Conjuring spin-offs that have felt like low-rent continuations, considering how The Conjuring and The Conjuring 2 served up scares most palpable. So why does The Devil Made Me Do It feel so boring? Perhaps it’s the lack of compelling side spooks who usually brew enough terror to warrant their own films. Perhaps it’s the lack of genuine frights as the special effects are shockingly low-budget this time around. Or perhaps it’s just the procedural nature of the whole investigation that breeds more boredom than chills.

What frights are present feel par for the course. David has the best bit of shock when his body contorts and he’s being attacked through a waterbed. His opening bit of being terrorized by a demon that makes blood come out of showers is a great way to start the picture. The film, unfortunately, goes downhill after this point by making Arne’s hauntings far more subdued than they should be. The assembly reminds me of the film Deliver Us From Evil, where characters spend most of their time drowning in dark, dank, and dreary indoors. Arne, for instance, spends much of the film in the mental health ward and a handful of expected freakouts where he shakes compulsively in his bed, starts to get chills, and makes all the windows shatter. The most intense scene we get from Ed & Lorraine is a scene where a hypnotized Lorraine is nearly pulled off a cliff by a demon.

There are such underwhelming haunts coursing throughout this film that it made me have to double-check the title to make sure it was a Conjuring movie. This feels more like the lower-level spin-off pictures of The Conjuring and less so like the main event these movies felt like. Perhaps this staging of The Conjuring world has set my expectations too high, having endured three lackluster Annabelle movies. But with this latest entry offering little surprise or shock in its routine haunted hijinks, the future for this series is looking rather grim (and not in a good way).