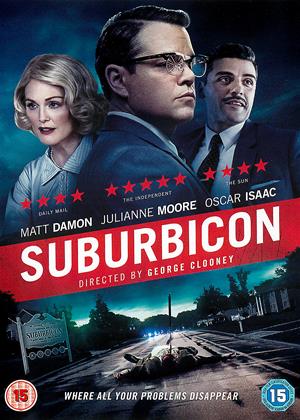 Comedy so subtle it fails to make you smile ... - Suburbicon review by Schrödinger's Cake

As a rule, I try and avoid trailers but accidentally saw the one for Suburbicon somewhere. From it I got the impression of a great cast delivering subtle, dark-comedy: how could I turn up the chance at that?

The reality though was a mish-mash of comedy moments that mostly were so subtle they passed without recognition, plus cookie-cutter predictable script work. Both of which combined to leave a cast of brilliant actors who seemed to be struggling to pull something cohesive out of the bag and make it all work.

Mostly I spent the film waiting for it to pick up the pace and get started for real, which it never really did.

Written by the Coen Brothers, you'd expect weirdness. Directed by self-righteous Hollywood liberal, you'd expect smug political correctness themes. And that is precisely what we get.

In a quasi-mythical 1950s housing estate in the USA, everything is perfect until a black family arrives. Though this is the subplot of what a man with a disabled wife plans. We've seen the easy target of idealised small town 1950s American or versions of it many times before - eg Pleasantville - always mocked in Hollywood films One wonders why. In the 1950s most kids had 2 parents at home and were much happier and rarely obese. These days 10% of American kids are doped up on Ritalin and most come from broken homes. Hoorah!

Sadly, like most Hollywood films these days, this movie goes in for preaching that 'racism is bad' (no - really?) and hammers the point home with the subtly of a fatal bullet.

Now, what would have been REALLY original is if the film had portrayed a white family in an all black area - that has never been done. I await someone with the guts to show black people was racist in a Hollywood film.

And I just did not believe the later plot progressions of this film - which 'jumps the shark' as it goes OTT and a half.

loved this film for its dark humour and great cast. it is excellently filmed and kept me on the edge of my seat, not knowing which way it would turn next. Full of plot twists and surprises

This is one of the best movies I have seen this year.

Brilliant directing by George Clooney and a very talented cast ( special mention - Alex Hassel who plays a heavy, and i last saw on the RSC Stage in Stratford as Henry V !)

The story is a proper black comedy, and you are never quite sure where it is going or what will happen next. But it is a real thinking movie, with several sub-plots to keep you guessing.

Excellent - seems to be criminally under-rated - Suburbicon review by PR

Really can't understand why this film was so poorly reviewed & glad to see that the other review here also enjoyed it. I thought it was beautifully made, well acted & a really clever, thought-provoking story. We both thoroughly enjoyed it.

Very interesting to learn that it's based on an unproduced Coen brothers script. I love their films & this has some of the dark, intelligent humour of those.

Such a strange oddity! - Suburbicon review by CS

I still can't make up my mind about this film. I wasn't really sure what to expect, but it's definitely not what I was expecting! This is really two stories cast alongside each other, the first is a story of racism in 50's America, it's easy to think this event is grossly exaggerated, until you understand just how dark it could be in the deep South! Then the other story is about Matt Damon, his wife, the sister in law, brother in law and son. I actually thought the best actor was the young lad who really shone through it all. Such a travesty, I was unsure if this were a dark Comedy or something much more sinister. It's so weird and out of place, with it's day go plastic pastiche of 1950's America. America seems to have a really big chip on its shoulder about how Black Americans were teated, which is not how it was in the rest of Europe, so we should be clear to understand that this is a uniquely American thing. Yes apartheid existed elsewhere, but America is unique i its memory of the past and that's what this film is, unique in so many strange ways!

Found this a very enjoyable film which highlighted some very disturbing aspects of life in the USA but in a very Cohen Brother / Fargo way - good watch !

Very good in parts, absolute howler in other aspects yet the film keeps going at a pace through to an ending that left me wondering is there a follow on to come! I hope not!

Too many plots - Suburbicon review by JK

Bits of this film were okay but the racism sub plot just confused things. I couldn't work out why and to whom the main character owed money in the first place when he clearly didn't need it? Usual 'everyone mumbling' meant it was easy to lose the thread.

Worst aspect of all - there are absolutely no trees in suburban USA!

Awful film in every aspect

Do not waste your time watching this

Interesting, but a bit of a mess tonally. - Suburbicon review by LC

This is a decent film, but a slightly confusing one in terms of tone. It starts out with a good solid dramatic hook, and looks are though it's going to be a serious thriller. But then both the villains and the music score start playing as though it's a comedy, and as we head towards the final act, events go so over the top it's completely impossible to take seriously, so it loses all dramatic tension. It is entertaining, and has some interesting ideas, so it's certainly watchable - but it seems as though it's neither one thing or the other - it's too knowing and arch to be a great thriller, but neither is it funny enough to be a laugh-out-loud comedy. Possibly it would have been better to just pick one genre, and stick with it - but it does at least achieve a certain unique feel.

Suburbicon echoes an atmosphere almost as old as golden fifties this subgenre satirizes. Akin to the likes of the lesser known Parents and the more well-known Pleasantville, this film pitches the same notion we’ve heard repeated time and time again. That the safe suburban neighborhood of white fences and families is nowhere near as safe and cheery as they appear, harboring dark secrets buried underneath their perfect lawns. But it’s surprising to see writers Joel and Ethan Coen and director George Clooney take such material and merely linger on the toxic setting rather than say anything interesting about it.

The film comes on strong by introducing the 1959 town of Suburbicon as a cheerful and peaceful community, send into chaos when a series of events occur. The first is the most cartoonish of rattling paradise; black neighbors! The mailman is shocked he is at a loss for words when delivering the mail and the neighborhood is so horrified that they stare and gawk. The fearful white community rallies to try to find some way to kick those brown people of the Mayer family off the block, organizing a protesting band that won’t stop singing and chanting outside their home.

It sounds like the story would be about racism, but that arc slowly fades as we introduce the more intricate goings-on of the black neighbor’s murder plot. The Lodge family becomes the target of robbers that tie them up and force chloroform into their faces. They pass out, but not all of them survive, as the mother succumbs to poisoning from chloroform exposure. How terrible for the father Gardner (Matt Damon) and his son Nicky (Noah Jupe). Oh, but they haven’t suffered enough. They’re targeted by hitmen further and it seems there’s a far more nasty plot at hand of deception and murder most foul.

Suburbicon has been pitched as a dark comedy, but it’s the inkiest kind of dark with comedy merely a loose byproduct in short supply. This is a film that showcases scenes of a mother being tragically buried, home visitors being poisoned, and a child cowering under his bed while angry hitmen swipe at him with knives. Not a single character is relatable in this farce as they all seem to have a motive and reason to kill each other, including the kid. Other additions to the cast include Julianne Moore as a sinister twin and Oscar Isaac as a scummy insurance salesman hungry for extortion. Random events will just happen to keep the story surprising but appear more as desperate acts of a script that is going nowhere. And the whole subplot of the black family next door peters out so terribly that its only purpose is for serving up the most heavy-handed of imagery in the final shot.

I can only fathom that this film would be considered a comedy for its imagery, expecting the audience to laugh at the 1950s setting for a terrifying plot involving the death of family members, racism, extortion, and children being targeted by hitmen. The story meanders in its messy staging that the only laughs seem to come from an overreaction to black neighbors and a scene of Matt Damon riding on a little kid’s bike while covered in blood. Sure, funny sights, but the more they hang around and the more the plot tries to contort itself further, any semblance of a joke is long gone. Better films about the disillusionment of the 1950s American dream exist and this sloppy presentation is one of the least interesting of that sub-genre, especially for assembling such talent behind the camera.