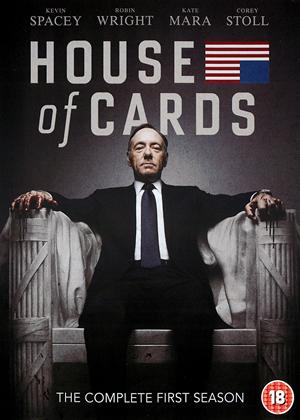 In many ways, the original House of Cards was superior - it was shown with perfect timing in 1990 as Mrs Thatcher fell from power. I would certainly say that gets five stars.

This US remake differs a lot from that one - it makes relationships sexual rather than purely manipulative, for example - both share one thing: a fine actor in the lead, with an overpowering performance - the late Ian Richardson in the 1990s version pips Spacey at the post for me for his sly Shakespearean asides to camera.

Really, this is just a rehashed Mephistopheles or Iago or The Devil, as in the old Mystery Plays. But none the worse for that!

Spacey is excellent, as always, bringing an interesting southern good ole boy drawl to the character, which marks him as an outsider in the Washington monied WASP camp. It's all like a game of chess really, and the plot does keep you guessing and has some fine intrigue. Well-structured too - so never boring (UK TV drama writers take note!)

I was less convinced by the young girl journalist character, who gets very irritating. The role of Peter Russo is well-acted too though, as are many minor ones.

Too many sub-plots though, I think - it feels like padding to make 13 episodes as well as shoe-horned in political correctness to get more female characters and storylines in there.

Plus, I am starting to get very bored and irritated by baddies in US dramas being shown as 1) cigarette smokers; 2) atheists (the new 'blacks' in America, it seems!).

But these are minor quibbles. All in all, this is a superior drama and I enjoyed it more than any British drama I have seen in the last 2 years.

Doesn't have the overall brilliance of the British original; but is excellent none the less.

This sentence is just to get me to 100 chars.

house of turds - House of Cards: Series 1 review by hp

think i'd disagree. Found it centred on Spacey as the only decent actor and only decent lines. while he as on screen, it was 70% worth watching. Other characters were wooden and cartoon like, So much also had to spelled out for the US audience. I had misgivings about the portrayal of the women: note his wife had to consider a dalliance before he does likewise. Typical of USA to take a good idea and make a ham of it: real disappointment

Based on the original series of the same name House of Cards: Series 1 is a tense and thrilling political drama starring some of America’s greatest faces from both the big and small screen.

Kevin Spacey stars as the corrupt congressman Francis Underwood who, after being passed over for the position of Secretary of State takes it upon himself to enact revenge against those who betrayed him. Along with the help of his wife Frank begins to scheme and double cross his way across the United States congress. His plans and involvement in the downfall of his peers remains unknown by those around him however, whilst the involvement of a female reporter makes things a little more complicated.

The frequent breaking of the fourth wall by Spacey’s character helps to keep the audience up to speed in his revenge, yet this is not the story of a wronged man seeking justice – Spacey manages the duality of his character’s public and private face perfectly, forcibly reminding viewers of his performance as Jack Vincennes.

For those who have had the political drama monkey hounding them since the end of the West Wing I honestly couldn’t recommend another show higher; the constant undercurrent of suspense is unrelenting, causing you to question every motive and action that appears on the screen, whilst the performances of the lead cast are unsurpassable.