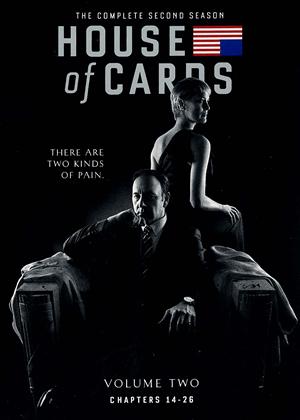 Reviews of House of Cards: Series 2

Kevin Spacey is an actor who has always been so effective at playing the viciously snide villain and his first lead role in a TV series feels like a perfect fit. Playing the crass and crafty politician Frank Underwood, Spacey inhabits the role of a seedy southern politicians who knows how to push all the right buttons to get what he wants. In season one, his goal was to climb the political ladder up to the perch of Vice President of the United States. You can probably guess what his new aspiration is for this second season.

Frank wastes no time setting up all the pieces for his ultimate prize. He quickly assembles his team, forms his internal strategy and dispatches one of his key players in a very abrupt and dark murder. While Frank handles the nosey reporters looking into the murder, he has a lot more on his plate for his shot at the presidency. His main obstacles this time are the Chinese government threatening an energy embargo and Raymond Tusk, the wealthy advisor to the president who is on to Frank’s game. They, and obviously President Walker, are the top priorities in his way. But, naturally, such seedy manipulation breeds more problems as several of Frank’s tightly-wrapped problems begin to unravel as he trims the fat from his life.

What’s so appealing about this season, and the show as a whole for that matter, is that Frank is clearly defined as the villain we follow. He’s not given an innocent origin of intent as with Breaking Bad or even given a sympathetic plight in the case of Dexter. He is pure evil from the get-go and only a few slivers of a better man slowly seep in as the story progresses. Frank is so in control of just about every situation that he showboats to the audience by addressing us directly through the fourth wall. Sometimes all he has to do is give us a knowing glance to let us inside his head.

Since the series skips the road to his corruption and swims in his golden age, we’re naturally awaiting for the moment where he tumbles down from the title structure. While it seems that it most likely won’t happen until season 3, I love how the series tears down Frank internally. He is aware of how far down into the political abyss he is sinking and only looks back on himself among all things. It may seem like he’s in control of the tricky game of Washington ladder-climbing, but underneath all that are a few glimmers of humanity he conceals. The deeper his career goes, the less of a human he becomes which is the secret terror only revealing itself at the worst moments.

One of the most heartbreaking events for him is dealing with his relationship to his favorite rib restaurant owner, Freddy. The two had a real kinship in their meal meetings, but when poor Freddy finds his business at an end due to family and bad deals, he refuses Frank’s generosity. As the series progresses, Mr. Underwood also finds his interests shifting from video games to civil war figurines after a telling visit to a battlefield. Even with all his mugging of the camera for all the revelations of his personal strategy, we can tell there is far terrifying fears beating beneath his cold exterior.

That’s not to say Frank’s trademark wit and devilish demeanor are dialed back. He handles several tough and delicate political situations with a calculated grace and feisty determination. His dialogue bouts with Tusk are brilliant to watch as they mostly bicker over the phone, Tusk growing more furious and Frank maintaining his bold calmness. There are enough curve balls thrown at Frank and company to still make things interesting. There’s an anthrax containment in a government building, an unearthed sexual past with Frank’s wife and a city-wide power outage keep things interesting. Most of these are only relegated to one episode and only a few key events span the series. Half the series follows an investigative journalist seeking the aid of a hacker to open up the murder Frank was secretly responsible for, but it’s sadly shelved presumably for another season. Probably the most interesting arc is when Frank’s right-hand man Doug attempts to keep a prostitute protected while she finds religion and starts fighting for herself.

For most of this review I’ve mentioned Kevin Spacey’s performance far more than anyone else. That’s not to say the other characters don’t have any exceptional moments. I’d go so far to say that the whole cast turns in some great supporting roles of the best TV series out there. But, let’s be honest, this is Spacey’s show. Spacey has always been perfectly cast as a villain and this is his crowning achievement with an unforgettable character I couldn’t take my eyes off of. He gives this story all the crass and sly spirit to keep you interested in a series that is essentially about bad people getting their way with underhanded tactics.