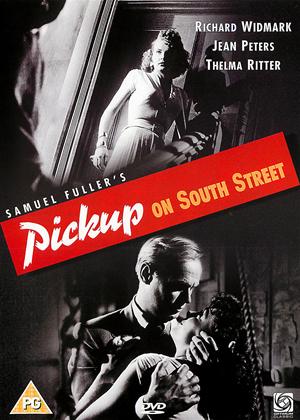 Reviews (3) of Pickup on South Street

Skip McCoy (Widmark) is a three time loser, a pickpocket/'cannon' who operates on the subway and snatches some microfilm of US military secrets wanted by the Soviets, and is being tracked by the FBI. Skip is so obnoxious that the detective on the case has a history of keeping getting busted for beating him up! The mark who had her bag picked (excellent Jean Peters as a working girl familiar with all the angles) also tries to recover the MacGuffin, and improbably falls in love with the odious Skip.

Pickup on South Street is a wonderful looking, exciting and stylish film. But what most remember it for first is a touching performance from Thelma Ritter as the neck tie selling stoolie Moe, who just wants enough money so she doesn't get buried in a pauper's grave in Potter's Field. She gets great lines  but brings enormous pathos to what could just be a Runyonesque archetype.

Fuller recreates the crooked capitalism of the black economy with great finesse. The criminal secrets that the underworld pass around all have an intrinsic monetary value. The only aspect of the film that no longer works is the theme of the red scare and it is interesting that when translated into French and German at the time, the great whatsit turns out to be drugs.

It relocates noir from California to New York, and this film benefits from a great harbour side set. Richard Widmark's shack on stilts in the water is a memorable image from the film. There's a fine jazz score. It's all great. Probably best of all is Fuller's pungent, realistic, jargonistic dialogue. Sometimes funny, often sad. Interesting that a film about the Commie menace should be so disillusioned with capitalism.

Watch out! There Are Reds Under The Bed! - Pickup on South Street review by Count Otto Black

Sam Fuller made some interesting films, but this isn't one if them. Although it doubtless pressed all the right buttons at the time, nowadays its ranting paranoia about "Commies" just seems embarrassing, especially since with the benefit of hindsight we now know that Communist infiltration of the USA at that time was practically non-existent, and the evil hypocrisy of Senator McCarthy and the HUAC is now seen as a shameful blot on American democracy that ruined numerous peoples' lives and drove some of its victims to suicide over an alleged "threat" that didn't really exist to any meaningful extent.

Richard Widmark, who would have won the Academy Award For Sneering every year if there had only been such a thing, sneers magnificently as somebody bad with a small b - he picks pockets - who encounters Bad with a very big B indeed - Commies!!! - and has to choose between the temptation of vast sums of money, which in his cynical sneering way he believes is the only thing he's interested in, and doing the right thing. Basically, does he want to get very rich by selling out every decent hard-working American to grovel under the jackboots of Stalin forever, or would he ultimately prefer to turn the vile Commie traitors over to the FBI to be shot out of hand like the rabid dogs they are? Gee, I wonder if you can guess how this film ends...

Widmark is good, because within his limited acting range he usually was. Most of the supporting cast are good. The basic idea of a selfish petty criminal having to weigh personal gain against admitting that some things matter a lot more than he does is a perfectly sound one, and features heavily in the plots of quite a few films in this genre. What sinks it is a script that allows Commies absolutely no redeeming features whatsoever. They're despicable one-dimensional cowards who are evil through and through, and nothing else. They can't even shave properly! If throughout this movie you replaced the word "Commie" with "Nazi Cancer Daleks From Hell", it would make just as much sense, and be a lot funnier. Even the confusion our reluctant hero experiences when he's attracted to a girl who is - horrors! - a COMMIE!! isn't used for proper dramatic effect because nobody genuinely attractive could possibly be one of those subhuman Commie scum, so she's soon revealed to be a dupe who didn't know who she was really working for, and just about throws up when she finds out. Technically it's well made and acted, but the constant one-note anti-Commie hysteria utterly ruins it.

Mainly interesting as an example of how Hollywood spread pro capitalist propaganda. The premise appears to be that thieves are morally superior to communists.