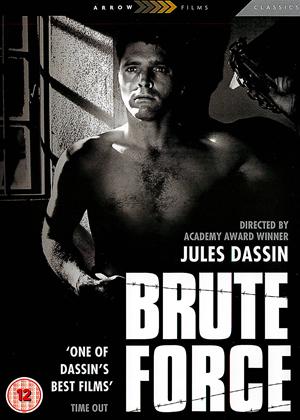 Brilliant prison drama which retains the liberal sentiments of the great Warner Brothers penitentiary films of the thirties. But America had since been through the war and the dynamic between guard and prisoner has now changed. The prisoners are humanised by flashbacks to domestic life. When the inevitable knock on the door comes, it now evokes images of the gestapo.

Many of the men fought in the war, and draw on combat experience to plan their escape. Cast against type, Hume Cronyn is the sadistic guard, his torso oiled, polishing his rifle while listening to Wagner, intent on beating a confession out of a prisoner with a lead pipe. No debate about whose side we are on here, though true to the laws of noir, Burt Lancaster and his cellmates are ill-fated.

Jules Dassin was associated with the Hollywood ten and this is the work of a dissident. Cronyn, as Captain Mumsey is a political figure, his power justified by his uniform (this seems to anticipate the Stanford Prison experiment). He is a fascist, who turns his guns on the inmates, or cajoles them into self destruction. Often his sadism is sensual ('I get quite a kick from censoring the mail').

Lancaster is the nominal star, but it's Cronyn that dominates the film. There is a chilling moment at the end when Mumsey is announced as the new Governor, surely a warning from Dassin of the danger of state fascism: 'Kindness is a weakness' he says as he lies to a prisoner that his wife has divorced him, leading to the inmate's suicide, 'the weak must die so the strong can live'.

Violent but excellent prison drama.Hume Cronyn as the sadistic warden is at his best and Lancaster is his usual brilliant self as is Bickford.Good idea to show the women who put them there and the photography works well in B&W.