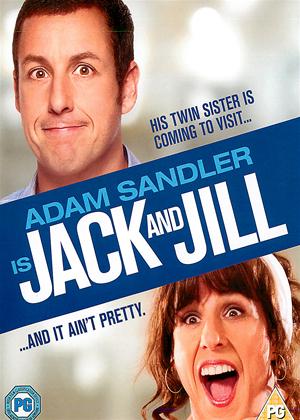 Reviews (1) of Jack and Jill

awful movie, Adam Sandlers films seem to be getting worse a waste of an evening and I wont be getting any more of his films

Nope, ‘Jack and Jill’ did not go up the hill – it really went downhill. Adam Sandler playing two of him in one movie, brilliant. Adam Sandler playing two of him, one of which is him in drag, dreadful. But it happened. These ideas were actualized in Sandler’s Happy Madison production of ‘Jack and Jill’, in which he plays two of himself, but the other is supposedly a girl and he’s his own sister!

‘Jack and Jill’ earned 12 Razzie nominations – it is well-deserved. How Adam Sandler, once a funny man with a shtick has come to this, who knows. Maybe he got rich. Maybe he’s bored. Maybe he’s messing with us. Whatever the reason is, we lose.

‘Jack and Jill’ manages to make a movie out of nothing – a fraternal twin relationship on the rocks only to be ruined even further with the involvement of Al Pacino. You read that right – Al Pacino – ‘The Godfather’ and ‘Scarface’ himself. See, Jack’s twin sister Jill visits him and his wife (Katie Holmes) and kids for the holidays.

Jack’s none too pleased. Jill isn’t exactly the nicest chick since she almost has the same deplorable personality as his brother Jack. But at a Lakers ballgame, Jill catches the eye of Al Pacino – again, you’re reading it right – and he falls in love with her. Jack takes advantage of the situation; being in advertising with Dunkin’ Donuts as its client, he wants to use his sister Jill to lure Al Pacino to become its pitchman. Jill wants nothing to do with it – of course, it’s basically getting pimped by your own brother! And there lies the thin plot of ‘Jack and Jill’ and yes, it’s a movie. That also stars Al Pacino.

Adam Sandler tries his hand on Eddie Murphy’s expertise – starring in a movie with multiple characters under layers of makeup. Murphy can disappear in his many roles, Sandler cannot. A for effort but still, there was no point to make the movie ‘Jack and Jill’ if not to make money off its naive moviegoers… and ruin Al Pacino’s career. Leave him alone.