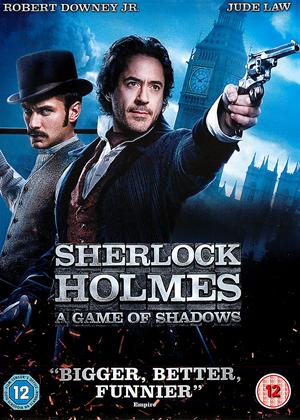 Rent other films like Sherlock Holmes: A Game of Shadows

Reviews (1) of Sherlock Holmes: A Game of Shadows

Don't waste your time. It's tripe - Sherlock Holmes: A Game of Shadows review by RP

I wrote a review for the first of Guy Ritchie's Sherlock Holmes films that began "I'm honestly not sure whether to be appalled or impressed." Now that I've seen the second one I am certain: I'm appalled.

This is tripe, pure and simple. Yes, there are a few good bits - Jude Law comes across well as Dr Watson, Noomi Rapace (the original 'Girl With The Dragon Tattoo') is OK as a gipsy fortune teller - but these are seriously outnumbered by the bad bits. The plot is so ludicrous as to be embarrassing, the CGI digital effects used to produce the 'period' backgrounds are obvious, there are far too many anachronisms, and most serious of all: Robert Downey Jr's characterisation of Holmes is too loud, brash and generally over the top.

Perhaps I should have guessed - I have a rule of thumb that while Stephen Fry may be a polymath, any film with him in is bound to be rubbish. And so it proved.

As for the very silly plot, it goes along these lines: evil genius (Professor Moriarty) buys up an armament manufacturing company and attempts to make vast profits by inciting a war (sort of WW1 but 25 years early) via a series of assassinations of diplomats. The good guys (Holmes + Watson) are out to stop him. They (of course) succeed while evil genius perishes. All too silly for words - and tediously long at over 2 hours.

While there is banter between Holmes and Watson the dialogue is sloppy and contains references to a supposedly gay relationship between them - a bit silly since Watson gets married half way through - but Holmes does get to cross-dress, wear lipstick etc. And if the dialogue and story is played for laughs then it is a failure - it is deeply unfunny.

The film is rated as a 12 certificate - if you're that age then you may well enjoy it. I'll give it 2/5 stars because I really have seen worse, but my honest opinion is: don't waste your time. It's tripe.

Robert Downey Jr. is the hyper-intelligent sleuth in ‘Sherlock Holmes: A Game of Shadows’, with his bromantic co-star Jude Law as Dr. John Watson and directed by Guy Ritchie (‘Snatch’, ‘Rocknrolla’). The trio band together again for turn-of-the-century England mysteries and adventures, only much more complex this time with the menace provided by Professor James Moriarty (Jared Harris), who is considered by Holmes as ‘the Napoleon of crime’.

In 2009, Downey, Law, and Ritchie made a hit out of their first foray into revitalizing ‘Sherlock Holmes’. As it is, Holmes is a compelling enough character to make adaptations with, but with Ritchie at the helm, it is given a modern-day action swag usually unseen in period films. For the sequel ‘A Game of Shadows’, there are more explosions, more locations, more conundrums to decipher, and more bromance between Holmes and Watson. Film is more than what’s expected – it is also what makes it too much for the audience.

There is less sparring between Holmes and Moriarty; they play chess mind games from a distance, and the tension that builds between them is not subpar.

Jared Harris as Moriarty does a great job portraying him as a not-so stereotypical villain, no ego-maniacal laughter and sneers here. There are more scenes with Holmes and Watson bickering like an old married couple – a fun dynamic that’s exploited here – and now an introduction of an empowered female, a gypsy in Noomi Rapace (the original Lisbeth Salander in The Girl With the Dragon Tattoo) – and yet, ‘A Game of Shadows’ looks just like a sequel to me, begging for Part Three.

Nothing much has improved – lest you consider Downey’s incoherent English accent from ‘Sherlock Holmes’ as at least understandable this time around – but Ritchie’s bag of tricks of Holmes’ articulating his moves in slow motion before it’s shown in regular speed and slow motions for running and firing guns are just that, the same.

Their take on Holmes is interesting enough but the steampunk quality can get grating and cartoonish. They should have called it ‘Holmes & Watson: Odd Couple’ instead.