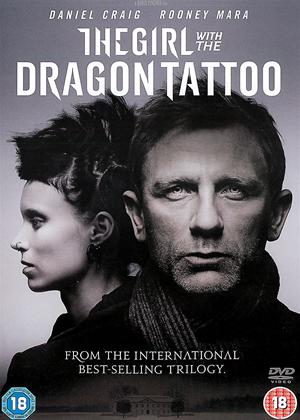 Synopsis:
Please note The handwritten look on the disc of this movie is legitimate and is intended to look like a burned DVD.

Reviews (2) of The Girl with the Dragon Tattoo

I'm not sure what this remake has to offer :( - The Girl with the Dragon Tattoo review by RP

Hmm... Having enjoyed the original Swedish films and subsequently read the books, I was interested to see what this remake would be like. I say 'interested' rather than 'looking forward to' because I have quite a jaundiced view of remakes – by definition they aren't very original. And so it proves here. Unless you dislike subtitles, or are a great fan of Daniel Craig, I'm not really sure what this has to offer. Yes, I know that this remake version has its fans and has won critical acclaim, but I'm not convinced. I'm not going to dwell on differences between the two versions other than to say that in my opinion the character of Lisbeth Salander was portrayed better by Noomi Rapace in the original. This isn't a bad film by any means – it's just that I can't see that a remake is justified after only 2 years. 3/5 stars.

Seen the Swedish film, watch this. - The Girl with the Dragon Tattoo review by JD

The Swedish filmed trilogy is in my opinion fantastic. It was bold to do this bit again and so soon. There are different emphases on the plot, the actors of course also have different skills and emotional portrayals which are not better or worse. Daniel Craig was remarkably good as the journalist a bit more heroic but with enough modesty for it not to be disappointing. The main differences I felt was mixing scenes together possibly to keep the drama of the horrific scenes driving the more quiet detective plot; and Lisbeth. She was less heroic and more troubled, at the time of watching less impressive but in retrospect a better sub-plot.

Based on the first of the best selling books by Swedish writer Steig Larssen The Girl with the Dragon Tattoo is the second on screen interpretation of this hugely popular crime drama.

This version, directed by The Black Dahlia’s David Fincher is the first adaptation to be told in English, rather than the book’s original language, Swedish. It is difficult therefore not to make comparisons between this movie and its predecessor; doing so is only to the movie’s detriment however as despite its success The Girl with the Dragon Tattoo pales in comparison to the original movie adaptation.

This version does have its qualities and strengths, it is brilliantly acted, starring James Bond himself (Daniel Craig) and Rooney Mara in the two leading roles, Craig is enigmatic as always whilst Mara plays the dark and troubled Lisbeth with both poise and attitude. The story is hardly one for the easily upset as it deals with a number of shocking and disturbing issues, yet they too are handled with a straight forward approach that will spare the sensitivities of some of the more fragile members of the audience.

All of this also works against the film however, there is something about it that feels distinctly “Hollywood”, where even the darkest scenes are dealt with a sharp edged certainty and clear direction that leaves the movie lacking the brutal depth and realism that was so effective in the original. The most unpleasant moments are viewed at a slight distance, with a easily definable edge that allows the audience to view such horrors within the safety of their own consciousness’; where what the narrative really called for was a painful and gritty realism, an almost uncomfortable closeness which leaves you feeling defiled and angry and afraid just as Lisbeth or Anita Vanger (Joely Richardson) do as their tales unfold on screen.

For those interested in this highly popular series but unwilling to dedicate themselves to reading the book or watching the original subtitled movie then The Girl with the Dragon Tattoo is an adequate alternative which gives you enough of the feel and plot of the story for you to feel satisfied in that respect, do not however expect to truly understand the allure of the trilogy simply from watching this adaptation. Thankfully the release of this film has inspired many to read the books for themselves, be warned however that if you then go on to watch Fincher’s probably follow up you are likely to view it through changed eyes.