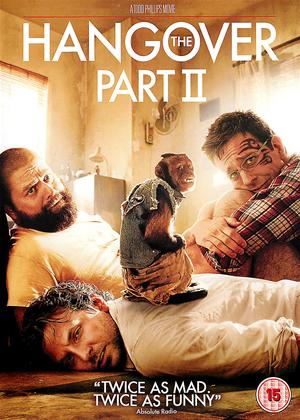 Some people must have a strange sense of what is "funny".

Just as the first one, it would be more amusing nailing a hand to the table than wasting time watching such peurile rubbish.

Side splitting - The Hangover 2 review by CP Customer

Loved this film - just as funny as the first one! I laughed so much I had to keep pausing it so I didn't miss anything. If you need a good laugh at a totally cringe worthy situation then rent these.

The Hangover 2 (aka The Hangover: Part II) review by Melissa Orcine - Cinema Paradiso

How do you make a sequel and make it slightly different than the first one? Oh yes, add a ‘Part 2’ to the title. In ‘The Hangover 2’ that’s what exactly happens; but to say that it’s ‘different’ even in the slightest would provoke an absolute debate… especially if it’s not, really.

‘The Hangover 2’ transplants its Las Vegas shenanigans to modern-day Bangkok, Thailand which former adversary, now honorary wolf-pack member Mr. Chow (Ken Jeong) declares as ‘Holler, city of squalor’! For Phil (Bradley Cooper), Stu (Ed Helms), and Alan (Zach Galifianakis), they are in another country – heck, even another world – but we know that these man-boys will not get what Stu wished, the wholesome Bachelor Brunch.

Director Todd Phillips has perfected the men behaving badly canon ever since he made ‘Old School’ and earned mega-millions on the first ‘The Hangover’. In its sequel, Phillips mines comedy gold from the original and sticks to the winning formula. Surprisingly even with the repeat gags, you’ll manage to crack up at both the silly and ridiculous that ‘The Hangover’ movie is known for. However it begs the question: Is ‘The Hangover 2’ worth seeing at all? If it’s almost similar to the original, why bother?

For those with a short-term memory, ‘The Hangover 2’ is going to be a riotous treat. If you haven’t been to Bangkok and would want to have a glimpse of the grimy, chaotic yet astounding city sights, this could be your sort-of mini primer. The movie does not boast of innovation here; of course when a wolf pack member is about to get married (this time around it’s Stu), a bachelor party will naturally ensue and yes, they will eventually blame the alcohol the day after. Zach Galifianakis is the rotund anchor of continuity in both ‘Hangover’ movies. Without him, the trials and tribulations of their drunken brotherhood will not survive on film. Whether it’s Mr. Chow or a capuchin monkey as his plus-one, Galifianakis delivers genuine, weird farce.

Or for the short answer: If you want the wolf pack to get richer, watch ‘The Hangover 2’.