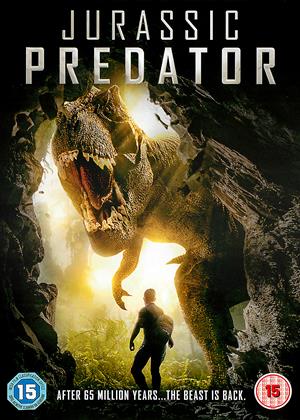 Incredibly prolific director Andrew Jones adds his own spin on the wealth of ‘parody’ films that have been popular over the past few years. Sometimes known as ‘mockbusters’, these are low-budget projects with titles mimicking those of high profile productions, often at around the same time as their release, in the cheeky hope of catching some of that bigger movie’s notoriety. Examples are ‘Transmorphers (2007) and ‘Paranormal Entity (2009)’.

Lee Bane, who co-produces and co-directs, and without whom few Jones films would be complete, once more plays a hard man, Hawkins, a dangerous ex-soldier sent on a mission to locate a wayward escaped Tyrannosaurus Rex in and around the woodlands of Devil’s Creek. He hand-picks a group of men to aid him, including musician/nutcase Rankin, played by another Andrew Jones (semi) regular Lee Mark Jones. Rankin is a musician, as is Lee Mark Jones, and his band ‘The Mescalito Vampires’ provide much of the excellent music here.

This is great fun, one of the most enjoyable of Andrew Jones’ vast catalogue. It makes something of a virtue of it’s low-budget trappings – indeed, a bunch of cash-strapped film-makers are amongst the creature’s victims – and I must admit, I was intrigued to see how something as ambitious as a ‘fully grown’ dinosaur would be visualised here. The creature actually looks pretty decent. No hint of CGI of course, the T-Rex is filmed from below and features only fleetingly.

The acting is also pretty good throughout, although in a handful of key-scenes, the dialogue is drowned out by the music, which lets things down a bit. There are some genuinely funny moments, but one of the most poignant scenes is played dead straight. Reminiscing about a fallen colleague, Bane gives, I think, the best performance of his career so far.

According to IMDB, The film became the top selling Direct-to-Video title in the national UK DVD chart on its first week of release, opening at #22. Andrew Jones’ star continues to rise, and I am very pleased about that.

Not sure whether this low budget Brit horror is meant to be a serious film or tongue-in-cheek - if the latter, it's not a patch on Shaun of the Dead. If the former, gawd help us all.

Very badly made with AWFUL sound - sometimes you cannot even hear the dialogue being spoken - and acting so wooden it could belong to the forest where the latter half of the movie is set (except Lee Bane who can act). The story jumps around, and the funny parts, if intended to be so (though this is labelled horror not comedy) are just not funny or OTT enough. cf Shaun of the Dead. If you want a piss-take then you MUST be really funny and make viewers laugh - I never did. Not once. Groaned in despair and shook my head at the sheer awfulness, yes. But laugh? Nope.

Bafflingly there is a Mexican music soundtrack, and weirdly the opening scene is shot in Swansea High Street with Oxfam's bookshop opposite.

An absurd car explosion scene which starts in a carpark and ends in the countryside! A very silly final scene too.

It could have been tidied up and rewritten to make it really funny - though I see it already way as a credit is to someone called Christopher who wrote the original screenplay that's been revised and added to by the director obviously.

The puppet T-Rex reminds me of old Dr Whos from the 1970s and no bad thing there - hilarious the way the camera always points up with that (the beast as no moving feet LOL!) and buildings to make em look bigger and keep cars and lamp posts out of shot!

1.5 stars rounded up to 2 stars for effort and that is really being VERY generous! Please god don't let there be a sequel.

Dreadful in every way - Jurassic Predator review by gazmb

Total waste of a rental, don't waste your time with this. The acting is very poor, the script and dialogue is absolutely dreadful. All you ever see of a T-Rex is it's s head and that is terrible, and doesn't even look like a T-Rex, very poor film. Not many films I haven't made all the way through but this is one of them.

Dreadful in every way