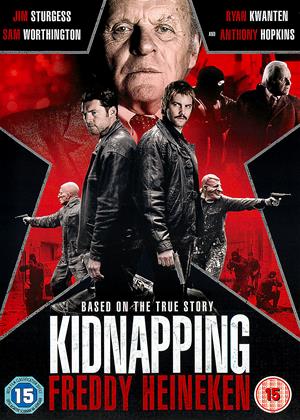 Anthony Hopkins spends the majority of Kidnapping Freddy Heineken as the titular character locked away in a room. Despite only having one-sided conversations with his captives - sometimes even talking to himself - Hopkins manages to steal this movie on his performance alone. It could just be that he’s a fantastic actor who has plenty of experience chewing the scenery while being boxed in a cage. It may also be that he’s the only powerful player in this true crime movie that mostly phones in a story more unique for its historical payout than the actions of the criminals.

The setup is entirely too simple. Taking place in Amsterdam during the fall of 1983, a group of struggling boys seek some much needed cash for their rocky futures. Their the usual lot of rabble-rousers who share pints with loud spirits and fists with playful enthusiasm. It’s very fitting that their gang’s current job is evicting squatters for landlords. They’re extremely forceful in their methods of throwing rocks at windows, smashing through windows and busting heads. Carnage ensues until the police come to break up the scuffle and arrest a few. With such a skirting of the law, it’s not a surprise they can’t land a loan for their business. So it’s off to a desperate life of crime with kidnapping and ransom.

The gang manage to abduct the Heineken heir and his chauffeur after several failed attempts that led to mildly-heated chases. They lock them both away in a secluded warehouse and tend to their captives at night with food, music and books. Hopkins pulls beautifully from his acting experience as caged prisoners echoing his brilliance from Silence of the Lambs. His captives are just slightly incompetent to the point that he can intimidate them without them even talking back behind their ski masks. He’s at least able to act well enough to warrant new books, new music and Chinese food from his captors. If the entire movie were just about Heineken’s diminishing spirits during his strange capture, it would be a stellar production as a one-man performance.

But the majority of the movie follows along with the criminals who are the least entertaining element. Willem Holleeder is the high profile leader of this operation - a Dutch criminal who received the name The Nose - but he’s mostly a bore played by the docile Sam Worthington. His partner in crime, Cor van Hout, is just as underwhelming played by Jim Sturgess. Both are decent actors when given the proper script and direction, but they don’t have a whole lot to work with here in a mostly passive production. If the movie really wanted to take such a focus to Willem Holleeder, it should have gone the full distance by focusing on his continuous life of crime rather than his most notable effort.

The majority of the movie is spent on the mechanics of the kidnapping: planning out the logistics, executing the capture, keeping the captives alive, assembling the ransom note, etc. But, honestly, there isn’t anything all that unique about their plans. Most of it appears to be just the luck of the simple the way they were able to pay this off given that they’re not exactly Ocean’s 11 at this type of operation. And it doesn’t take a criminal genius to see where all this is going even if you’re not familiar with the true life events.

Kidnapping Freddy Heineken is a rather flat capitalization on one of the biggest ransoms paid out for one man. It’s incredibly uneven the way it attempts to balance its intense car chases with its lukewarm drama of kidnapping. The true story itself is interesting enough, but not when filtered through a dreary and sleep-walking production by director Daniel Alfredson. As much as I’d like to recommend the film for Anthony Hopkins’ performance alone, even he isn’t strong enough to carry this movie for all the heft and pep he brings out in his few scenes.