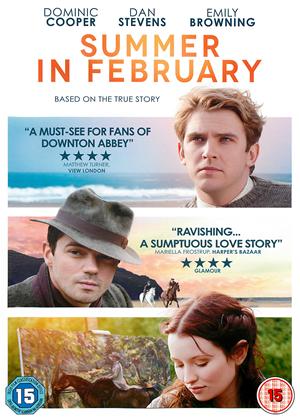 Reviews (1) of Summer in February

Gosh, this film is boring. It's only an hour and a half but feels much longer. This is probably because of the 'who cares?' aspect of the story. I know of these artists but even I wasn't interested...

The acting is fine; the views of Cornwall's wonderful beaches are great, as they always are, even when the pictures are taken by a 3 year old.

In this movie, the cameraman may well be older than 3 years old, but he may possibly be drunk - the wobbly hand-held camera work occasionally makes scenes indoors look as though they are taken on a boat, because the camera leans to left then right. Very odd and sloppy too.

I suspect the book on which this is based is better - it's probably one of those tragic romances aimed squarely at women of a certain age.

Watch this only to pass the time or to look at pretty sea views. It's like a 2 star B & B really, so that's the score I shall give (I am tempted to give one star, but I love views of Cornwall!)

This year has been a big one for films discussing and appreciating art in its many forms. From Quartet to Gimme the Loot, art has been at the forefront of filmmakers minds and it has created some excellent pictures. Summer in February however makes a vital error in that it appreciates art too much and forsakes what could have been a heartbreaking and original story.

Set in 1920s England, the film follows the relationships of a group of artists called the Lamorna group. When newcomer Florence (Emily Browning) arrives in Cornwall to join the group she finds herself drawn to two different men, famous painter AJ Munnings (the consistently terrible Dominic Cooper) and land agent Gilbert Evans (Dan Stevens). Florence finds herself stuck between two minds as she tries to express her true love of art.

Unlike Quartet, Summer in February doesn’t so much appreciate art as it does ram it down your throat and ask you to choke on it. It holds its characters in such high regard that they ignore the self obsessive actions that make them downright loathsome. The script, by Jonathan Smith, praises Munning’s for his artistic genius while ignoring or embracing the horrific things he did to Florence. In fact the whole film is populated with characters who deserve no empathy so by the time the film’s upsetting finale rolls around you really couldn’t care less.

Stevens proves the film's saving grace to some extent as the only decent character out of the bunch while Browning makes Florence a dull, dreary mess of a woman, a character you are forced to follow but never like. However Browning looks almost talented next to Cooper who butchers his way through his lines as he turns a well known painter and respected man into a galavanting idiot with no moral compass to speak of.

Ultimately the film lacks any kind of grip, it never tells an original or interesting enough story to keep you interested but it has a memorable performance by Dan Stevens and some decent visuals of the Cornish countryside to keep people entertained if you're looking for something with looks but no substance.