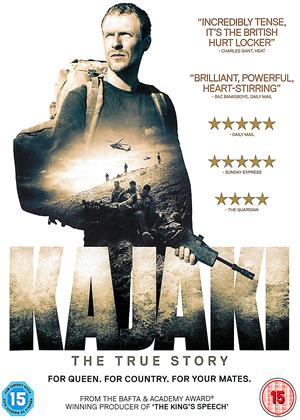 A superb film that gives a convincing and frightening portrayal of the horror and bravery of this particular war.

A gem - Kajaki review by DJ

This was drama at its best. I was expecting an action war story but what I got was a film that brought home the true horror of war as experienced by real soldiers. The predicament they found themselves in was truly disturbing and the drama , along with not knowing what was going to happen next , was riveting. Never mind the Hollywood take on war and the gung ho yankees blasting their way to victory with heroes held high , true heroes are soldiers like those depicted in this film. A must see drama as good as any action film.

Totalling gripping and an antidote to most Hollywood war films. It gives a real sense of the reality of war and the bonds holding a group of soldiers together.

This is a superb film - the best film I have seen about an army facing the travails of the desert in Afghanistan (or Iraq). Better than the Hurt Locker, Green Zone or all the US movies on wars in those desert countries.

Super-realistic with utterly believable dialogue - it shows what can happen to soldiers when things go wrong. Esp with mines...

Based on a true story - watch over the end credits to hear the actual radio dialogue and see what has happened to the men involved in this episode, for which many medals were awarded.

Interestingly, this film was privately funded - no funding from the EU, the lottery or the achingly pc diversity-obsessed BBC (maybe because there are NO women in the film and just one black soldier and a non-pc joke about him said by other soldiers).

This film should have got BBC funding and lottery funding too - instead of the tedious pc drivel they usually fund and inflict on a public who want good films, not pc propaganda shoved down their throats.

A must see for everyone. Watch it and realise how war can never be glorious.

However, Afghanistan was a success as British and other forces stopped that country descending into a Taliban hell and its influence moving south - not to mention stopping Osama's planning terrorist atrocities in the West. Sadly, our support of Islamic fighters against secular dictators in north Africa and Syria has led to the rise of ISIS, who are even worse then the Taliban. Watch this film to realise why our sending ground troops to deal with these barbarians is not an option.

Called Kilo Two Bravo in the US, this is a riveting war movie about British paras trapped in a minefield in the 2006 Afghan War, with casualties mounting. It’s hard to criticise when it’s so well staged and based on a true incident, with profits from the cinema release going to charity. Nevertheless, judged purely as a piece of film, it’s certainly not a feel-good night’s entertainment.

It’s filmed with documentary-style naturalism with unknown actors, naturalistic drama and no score. The first half-hour is full of male banter and military jargon that’s hard to follow. The attempt at authenticity is laudable but it’s more of a filmed document than a great film in its own right. However, it certainly keeps you glued to the screen.

I cannot believe you will feel closer to a war without serving for your country. - Kajaki review by Bullitt 68

Simply the most realistic film I have ever watched about the horror and realism of recent middle eastern conflict.

It is relatively simple and focussed. It is not American. It is not jingoistic. It is not overly sensational. It is well filmed. It has excellent acting. But most importantly does not feature a single actor I have seen before; because of this I believe I am watching the real soldiers going through this ordeal.

Stick with it as the film takes a little while to get going; the characters seem very raw as they go through their daily duties just as you would expect real soldiers to. In some ways this anti-climax adds to the drama when all hell breaks loose.

By the end of this film I was drained and I cared about every single soldier [character]. There are very few films where I can say that.

I recommend this to everyone. I cannot guarantee you will "enjoy" it, but you will never forget it.

I expect this is as close as anyone is going to get to dramatising the experience of the British Army in Afghanistan. You cannot but sympathise with the plight of the soldiers who find themselves trapped in a minefield, sustaining horrific injuries. But, whilst admiring their heroism, you have to ask why the information about the minefield had not been passed on to them, why their communications equipment was so poor and why the Army didn't have the necessary equipment to extricate them - something which seems to have led to the death of one of the wounded. From the viewpoint of 2019, this looks like a pointless war which went on too long and cost too many lives. Be prepared for realistic soldier dialogue which can be a bit strong at times and confusing at the start of the film - but the drama of the situation soon takes over.