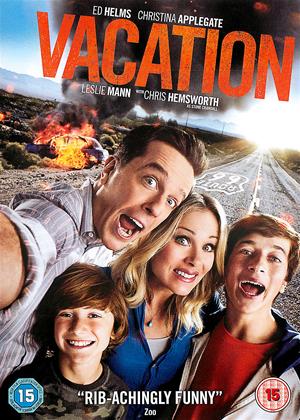 Dear Sir/Madam, I was completely shocked when this film started. I was watching with my grandchildren ( 8 and 6 years). the swearing and the bad filthy language started the first minutes and carried on along from bad to worse. We couldn't watch more than 3-4 minutes as the three of us were sick and disgusted.

Unfortunately, there was no warning, and this filth was categorized with the kids and family films.

I would be glad if you could do something about this.

In a time when road trip movies have become the ultimate cliche, remaking National Lampoon’s Vacation doesn’t sound as appetizing, especially considering Lampoon’s loss of credibility in comedy. That may perhaps explain why the title of National Lampoon was taken off the movie to remove that stigma and distance itself from the previous “Vacation” movies that were mediocre to say the least. But for having so much to live up to, this new Vacation manages to resurrect the franchise from the ashes of direct-to-video hell and back into an arena of comedy that is fearlessly savage.

Rusty Griswold has grown up from a young Anthony Michael Hall to an adult Ed Helms. Now married to his wife Debbie (Christina Applegate) and his two sons James (Skyler Grisondo) and Kevin (Steele Stebbins). Finding himself cursed with his heritage as a meek man who commands little respects from both his family and job, Rusty seeks to rekindle his family the same way his dear old did before: a road trip to Wally World. But Rusty is apparently cursed with short-term memory as he forgot all the misadventures that happened along the way and runs straight into them with all the glee of his pa. There’s never a moment where he pulls back on his road trip experience to avoid the pitfalls of driving across the country. He has become the new Clark Griswold, doomed to repeat history.

But for trying to recapture that former glory as a sequel/remake, this new take on the Vacation saga is surprisingly more hilarious than you’d expect. Rarely does the humor ever feel repetitive or one note. Nothing is off limits - everything from offensive dialogue to bodily functions is trotted out. But unlike other comedies that divulge far too long on the gross-out or adult language, Vacation feels incredibly balanced and tightly assembled. It’s incredibly refreshing to finally watch a comedy that is more controlled as opposed to just leaving the camera on for whatever improv the actors can muster before the gag dies. It also allows for the humor to be more diverse as it spans from sight gags to wordplay to fourth-wall breaking. It was a genius to move be temporarily self-aware as when Ed Helms declares to his family that this vacation will be different from the original, but be able to stand on its own. Joke is over and on to the next bit.

Even with the relation to the original via cameos of Chevy Chase and Beverly D’Angelo, the new Vacation DOES stand well on its own. The presence of Wally World is hardly even addressed as there are so many original distractions that does justice to the missing title of National Lampoon. The transportation of the trip is a strange foreign van that has all sorts of problems exaggerated to a cartoonish level. After all the standard busted and malfunctioning automobiles of road trip movies, this vehicle is uniquely insane with ill-fitting mirrors, two gas tanks, an electrical cord that does not retract and a vast array of remote options with strange icons (“We won’t use the swastika one.”). The hi-jinks ensue - including the obligated destruction of the car - but it’s all so richly absurd and illogical that it’s worth a hefty amount of laughs.

With all the craziness, there’s still a real arc to the characters that helps ground all the comedy and prevent it from just being random. For all of Helms’ inappropriate dialogue, he’s still a sincere dad who just wants to do good by his family (even if it’s a serious trial by fire). Applegate perfectly embodies the wife who is afraid that she’s missing something in her life and doesn’t entirely understand what she wants. The kids fulfill the sibling rivalry element, but with an odd dynamic of the little brother being a massive bully of the bigger brother. The family is also given enough crazy characters to interact with feel much very much realized. Rusty’s sister Audrey is visited at her ranch where her conservative weatherman husband (played as a good-old-boy by Chris Hemsworth) keeps her locked up on his ranch. He’s completely against her working, but they only fight through laughs of desperation. Being a conservative and wealthy couple, much of the expected jokes are passed over for the more unexpected elements. Other characters have some hilariously dark twists as with Charlie Day playing the Griswold’s suicidal rafting instructor.

Vacation is worthy of carrying the torch of the original movie with melodies of Holiday Road and Chariots of Fire in tow. It’s a film that plays to all the comedy you’d want, but rarely what you’d expect and never do a degree of padding. There are plenty of comedic stops along the way, but none that draw out to the point where you find your eyes wandering. More importantly, this is a road trip movie that has found a solid balance of adult language, poop jokes, puke jokes, slapstick, gore gags and sexual silliness. No scene goes too long, no gag past its expiration date. And any film that can renew my love for Seal’s Kiss From A Rose as its running theme is okay by me.