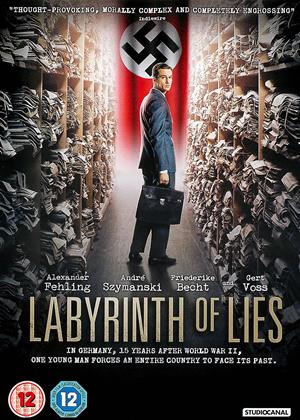 Synopsis:
Germany, 1958. In those years, "Auschwitz" was a word that some people had never heard of, and others wanted to forget as quickly as possible. Against the will of his immediate superior, young prosecutor Johann Radmann (Alexander Fehling) begins to examine the case of a teacher who has recently been identified as a former Auschwitz guard. Radmann soon lands in a web of repression and denial, but also of idealization. He devotes himself with utmost commitment to his new task and is resolved to find out what really happened. He oversteps boundaries, falls out with friends, colleagues and allies, and is sucked deeper and deeper into a labyrinth of lies and guilt in his search for the truth.
But what he ultimately brings to light will change the country forever.
Actors:
Alexander Fehling, André Szymanski, Friederike Becht, Johannes Krisch, Johann von Bülow, Robert Hunger-Bühler, Hansi Jochmann, Lukas Miko, Gert Voss, Tim Williams, Mathis Reinhardt, Hartmut Volle, Werner Wölbern, Timo Dierkes, Michael Schernthaner, Susanne Schäfer, Robert Mika, Stefan Wilkening, Elinor Eidt, Lisa Martinek
Directors:
Giulio Ricciarelli
Producers:
Jakob Claussen, Ulrike Putz
Writers:
Elisabeth Bartel, Giulio Ricciarelli
Aka:
Im Labyrinth des Schweigens
Studio:
StudioCanal
Genres:
Drama
Countries:
Germany, Drama

Reviews (1) of Labyrinth of Lies

This is an interesting film, which shows what the atmosphere was like, in Germany, in the 1950s, in relation to the country's Nazi (recent) past. A young and ambitious prosecutor refuses to give up when he is fobbed off, wanting to investigate former SS guards at the Auschwitz extermination camp.

This is a good film, with good acting, but it is a bit slow, perhaps, at times. There are also a few places where it is pretty obvious the scene was not shot outside but in a studio (cardboard-type facades of houses on a large square at one stage).

Still, I recommend it and enjoyed watching it. How do you come to terms with evil, and the evil perpetrated by members of your own family? A tough one.