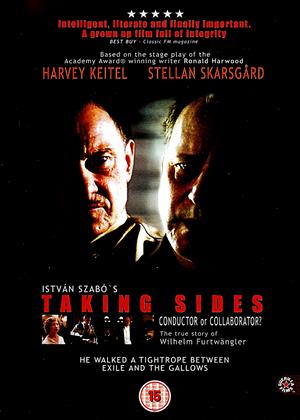 Synopsis:
Taking Sides - based on true events - recreates the suspenseful post-World War II interrogation of Dr Wilhelm Furtwangler (Stellan Skarsgard), the brilliant conductor of the Berlin Philharmonic, who is considered by some to have been the most brilliant conductor of the 20th century. In the course of his de-Nazification by the Allies, Furtwangler is forced by a tough-talking American Major (Harvey Keitel) to re-examine his role during the Third Reich in the most uncompromising of terms.
The confrontation between the soft-spoken cultural icon of the old world and the rough, emotional hard-hitter from the new world, makes for some electrifying verbal pyrotechnics, and brings the role of the artist in an evil regime into the limelight, to be examined along with all the other moral issues and ambiguities emerging from World War II.
Actors:
Harvey Keitel, Stellan Skarsgård, Moritz Bleibtreu, Birgit Minichmayr, Ulrich Tukur, Oleg Tabakov, Hanns Zischler, Armin Rohde, R. Lee Ermey, August Zirner, Daniel White, Thomas Thieme, Jed Curtis, Garrick Hagon, Robin Renucci
Directors:
István Szabó
Writers:
Ronald Harwood
Studio:
Guerilla Films
Genres:
Drama
Countries:
Germany, Drama

Either you are with us or against us seems to be the motto of the US Major (Keitel) who is asked to interrogate the famous German conductor Wilhelm Furtwängler after the war. The American seems to think that a good German is either dead or in exile. Furtwängler was certainly not in the resistance but did manage to help Jewish and other threatened by the Nazis. The movie is based on a British play so don't expect action, however, look forward to an intelligent film which asks almost existential questions about what you do living in a dictatorship. Aching and powerful - and of course with music by Beethoven and Bruckner.

This is written by the great British (and Jewish) writer Ronald Harwood (originally Horwertz) - and it's based on his stage play from 1980. Harwood won the Oscar for The Piano screenplay and also wrote the script for The Diving Bell and the Butterfly. He is one of those British writers trained and grounded in the theatre, who have made the transition to film more than a bit successfully. He's just turned 81 too!

The acting in this film is superb too, and the characters are well-drawn.

It's all basically about whether art and politics should mix, and whether artists of any type have a responsibility NOT to do what evil dictators want (well, we could ask those presently pandering to Russian and Chinese leaders LOL!)

This is an insoluble problem, of course, and I can see both side - as indeed does the play and the characters within in.

I shall not give a spoiler of the ending here.

Just to say there is real footage of the actual Furtwangler greeting Goebbels at the end of the film. It all revolves around whether this great conductor was complicit in Nazi crimes and supported them. Snapping at his heels is a young conductor - Karajan - who was still conducting in the late 80s!

The extent of the involvement of ordinary Germans in the rise of Nazi-ism is also explored. And thankfully this drama does not wallow in pc pity parties of certain other dramas which portray the Germans all as innocents led astray by a pied piper called Hitler. This is a drama with guts. As for anti-Semitism - well, the Russians have hated Jews for centuries, which is why so many left Eastern Europe for the USA especially.

If you want car chases and explosions and CGI computer games in your movies don't rent this out; if you want an intelligent and thoughtful drama (and yes that means wordy with lots of dialogue and big words) then watch this - you'll be thinking about it for days afterwards.