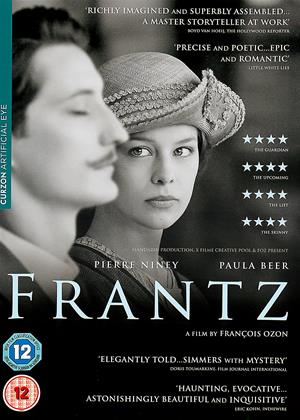 This covers the awkward topics of French and German national identity right after the first world war, along with the trauma of the soldiers and the bereavement problems of the families on both sides. This is a lot to pack into one film, and it is incredibly well written into a moving and well paced story, superbly acted by all, and stunningly filmed with an imaginative choice of black & white merging into colour at the right moments. An excellent and very watchable film.

This is a beautifully photographed and absorbing film. Some of it is in black and white but it doesn't have the austerity of a Bergman film and some of it is in colour. Fairly early on you realise where the film is going but this doesn't spoil your enjoyment. In many ways it is a very conventional film but still compelling to watch - so glad films like this are still being made: it's the opposite of a blockbuster.

To be recommended. A touching, sensitive and well-acted piece (although I'm not sure I entirely understood where Anna was heading at the end but perhaps that's ok).

To be enjoyed on a Sunday afternoon with some tea and cake.

A moving, slow-burning romance cum-meditation on war, but to drag us to the point of a happy

ending through twists and turns and then frustrate it at the last, was annoying and not particularly credible.

This film is so-so - typically pretentious French in its use of black and white and colour film, and its slow pace. It looks very pretty with pretty people sitting around smoking a lot.

It is based loosely on a US film from decades ago as it says on the credits at the end (The Bewitched?)

Anyway, so-so and intriguing in parts.

A quiet gem of a film - Frantz review by NR

My wife and I loved this film. The gentle pace gives time for the characters to grow on you until you begin to care what happens to each of them. There is war and love and joy. If you don't shed a tear now and again then you really need to go to empathy school. The ending is never clear until the final few minutes but you find yourself rooting for Anna; well we did. Do try it.

Wonderful story with lots of twists and turns and very French! I loved the shifting from monotone to colour and courageousness of the the lead female. All the characters were superb and it is so well acted. Highly recommended!

THE EMOTIONAL CONSEQUENCES OF THE PIECE - Frantz review by CH

Pause, and one realises that anybody who worked on, say, Casablanca or The Third Man could screen in their minds a film different from the one familiar to us. That is, they saw the colours of sets and clothing. Not that this is to crave “colorising” (the vogue for which appears to have passed). Such films were designed with their splendid black-and-white imagery to the fore.

Similar has been done with Ozon's Frantz (2016), most of which is set in 1919 and appears to us in black and white. It appears in keeping with a small German town where much of the events turn around a graveyard, apparently the last spot for a soldier killed in the war. The plot is simple - and complex. To say more would spoil it, as would any discussion of the graveyard in The Third Man.

In grief for the soldier, her fiancé, Paula Beer visits the grave as usual and is surprised to find flowers on it. They have been put there by a visiting Frenchman (Pierre Niney). Discussion ensues, and is welcome - not least because it distracts from a tedious man who is pursing her with an eye on marriage.

The film is a marvel to watch, its rhythm finely paced to bring out all the conflicts within and between the characters (including her parents), so much so that the small town smoulders.

Only one thing is missing. Lubitsch's 1932 film Broken Lullaby, from a play by Maurice Rostand. It is currently unavailable. Whoever has the rights in it would surely do well, for those who enjoy Frantz will want to seek out its inspiration.

Directed by France's Francois Ozon, the bi-lingual film is an exceptionally movie ode to pacifism and friendship. I won't detail the plot but I will say that I wasn't familiar with the source material, so I pretty much went to this film without knowing a thing about it's plot. Superficially, it reminded me of Michael Haneke's White Ribbon - that too is a B&W film that is set in rural Germany in that same war-wrecked decade of the early 20th century, however, a romantic mystery stands at the heart of this film. FRANTZ casts a peculiar spell over the view by weaving a lot of intrigue up until the halfway mark when the plot does an about turn and delves behind the reasons for all the pretence and mystery. It's a tantalising story and one enhanced by the cinematography, beautiful score, direction, and note-perfect performances.

This film was randomly selected from my 700+ pot of films, so this was a very welcome surprise. 10 out of 10.