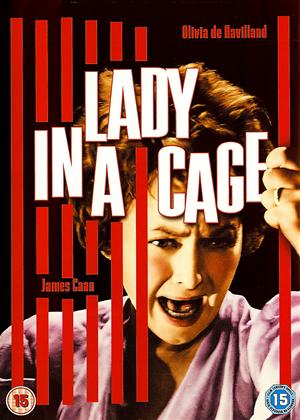 Synopsis:
Alone in her residence over a sweltering holiday weekend, a widow is accidentally trapped in her home elevator during a power failure. Her meticulous, well-organized world is shattered as the elevator, stalled nine feet above the floor, becomes a claustrophobic torture chamber - a cage. Unable to escape, her situation becomes desperate when the emergency alarm attracts a swarm of terrifying intruders - a drunken derelict and his boozy prostitute friend, as well as a trio of young delinquents who embark on an orgy of wanton vandalism and sadistic brutality that culminates in murder.
Actors:
Olivia De Havilland, James Caan, Jennifer Billingsley, Rafael Campos, William Swan, Jeff Corey, Ann Sothern
Directors:
Walter Grauman
Writers:
Luther Davis
Studio:
Paramount
Genres:
Thrillers

Although this is billed as a thriller, it would be more accurate to call it a very, very black comedy with a ludicrously melodramatic plot featuring a string of outrageous coincidences and absolutely no truly sympathetic characters whatsoever. It's also a rare example of a film noir that takes place in blazing sunshine, but nevertheless it's still as dark as they come.

Right from the start, with our smugly privileged heroine relentlessly over-mothering her adult, implicitly gay son who obviously can't endure even one more day with the old bat, while outside people casually drive past a run-over dog with their car radios spouting a ridiculous sermon about "anti-satan missiles", this is obviously going to be a film about how little anybody really cares about anybody else. Which it turns out to be in spades. When a freak power failure traps the slightly disabled protagonist in a precursor of the stairlift with the most poorly-thought-out safety features imaginable, she soon discovers that ordinary, decent folks completely ignore alarm-bells that are none of their business, though they do attract the attention of people who have their own reasons for being interested in houses whose occupants are helpless...

The characters are as caricatured as the situation is contrived, and there's a lot of outrageous overacting on display, especially from veteran character actor Jeff Corey as a spectacularly demented alcoholic tramp, and second-rate Brigitte Bardot impersonator Jennifer Billingsley as a wild child so dimwittedly amoral that she not only has absolutely no objections to casual murder, but appears to be sexually aroused by the thought of dying in the electric chair. In true film noir tradition, everyone does their best to ruthlessly double-cross everyone else, and having even a glimmer of humanity is a weakness that the real predators soon pick up on, so it's not surprising that the standout performance is from an unknown young actor called James Caan as a truly terrifying psychopathic hoodlum with absolutely no redeeming features whatsoever.

Steadily mounting paranoia combines with utter cynicism at every turn - in one delightful throwaway detail, we see that a shady pawnbroker's shop is so sleazy that several customers have apparently pawned their lavatories! And having tried appealing to her tormentors' better nature only to find out that they haven't got one, our oh-so-civilized heroine's final solution to her problems is genuinely shocking. It isn't for everybody, but if the idea of a grand guignol pitch-black comedy with a dash of high camp and a weird presentiment of the crimes of the Manson Family (I wonder if Charlie ever saw this film?) appeals to you, I'd recommend it highly.

"Introducing..." This word in a film's opening credits invariably heralds a name of which one never hears again. In the case of Lady in a Cage (1964), however, it is one James Caan, a tight-jeaned teenager whose hairy chest brushes against Olivia de Havilland as he speculates when anybody last nustled beside her breasts.

This, one might already infer, is hardly a typical week's release at that time from such a studio as Paramount, all the more so as it also finds Ann Sothern as a prostitute past her prime. All the while, this July 4th, somewhere in sunny, well-heeled suburbia, traffic - all those huge hoods and trunks - goes by, the occupants unaware of the terror unfolding in a house which contains riches at every turn.

Olivia de Havilland, who has been recovering from a hip operation, has been left for the long weekend by her unmarried, thirty-year-old son who puts on a mantlepiece a note briefly glimpsed in the opening moments (a threat of suicide catches one's eyes). She does not get to see it. In his departure, the son inadvertently knocks into a ladder propped near an electricity cable, which duly causes an outage in the house, at the very moment when she is inside a lift which has been installed so that she need not take the stairs.

And there she stays, a dozen feet from ground, the alarm ignored outside: it alerts only an old drunk, who stumbles inside, grabs and hawks a few items, gets the measure of the scene, hocks these goods and returns to his boarding house where he seeks the help of Ann Sothern to continue with the heist.

Their notion of easy money becomes something else. Written by Luther Davis, who was better known for television series, it is an extraordinary study in escalating violence, a world in which objects become meaningless as the threat of death grows as steadily as disputes between those two are matched by Caan and his two cohorts, one of whom - Jennifer Billingley - languishes some while in the unwonted luxury of a hot bath.

Much of its power, its rising above absurdity, comes with a remarkable music score by Paul Glass. On its own this would seem beyond avant-garde, something unlikely to be played on the gramophone in such a house;. Alongside the varied angles of the cinematography (effective black and white), the music adds to the suspense, to the proliferating events which allow for only clipped dialogue (and Olivia de Havilland's recourse to improvised poetry). Such is her peril, slipping several times towards the very edge of the lift's floor, that one's own armchair feels as if it is no longer safe.

An obvious question comes to mind, especially in these circumstances, but such is the heightened reality of it all that one brushes that aside, as the pace increases while the sun moves across the sky, and, in that turbulent decade, bombs began to fall upon Vietnam: the background to such films, set in diverse eras, as Bonnie and Clyde, The Wild Bunch, Straw Dogs, A Clockwork Orange. Before them all, by quite a way, was Lady in a Cage, and the wonder is that it is not better known.