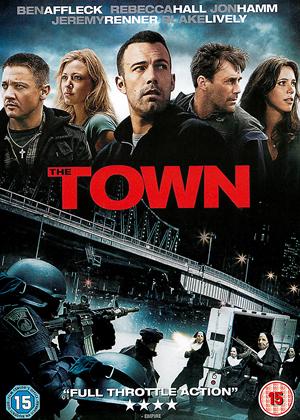 I actually found this film quite entertaining although I didn't make much of a connection with any of the characters. It moves along at quite a pace and the romantic sub plot is nicely weaved into the main story without overplaying it. There are moments that are somewhat far fetched and it massively glorifies crime but a decent evenings entertainment.

A solid crime thriller. - The Town review by CP Customer

This is another solid and well made movie from director Ben Affleck, with a nice mix of character based drama and gritty crime thriller. The Blu-Ray features two cuts of the film. The two hour theatrical release and a two and a half hour extended version. In my view the extended cut is the superior movie, the storyline between Doug and Claire is more developed and the extended version also includes additional scenes which flesh out the relationships between the main group of characters.

Great film, strong acting and you really want to see what happens at the end....I'd recommend it to anyone

When I first watched The Town many years ago, after about half an hour I turned it off, as I was in the wrong frame of mind to watch it and at that time, it wasn’t gripping me. But after seeing it re-released on 4K and also having watched both Argo and Gone Baby Gone, I wanted to give it another shot and I’m really pleased I did.

The film is really good, with moments of high tension, as well as great performances. The robberies were all staged excellently and the smaller, quieter moments also hit home as well.

Ben Affleck is great in the central role, and the supporting cast are also excellent. Chris Cooper turned up for one scene and made more impact in 5 minutes than some actors manage in an entire film. For me, there were 2 stand-out performances; Jeremy Renner as psychopathic Jem, who rightly was nominated for Best Supporting Actor at the Oscars, ratcheted up the tension whenever he was on screen and you never knew what his character was going to do.

And finally, Pete Postlewaite as Fergus “The Florist.” This was a poignant and sad moment for me as not only did he, like Chris Cooper, only have a very small amount of screen time which he did wonders with; but this was one of his last performances before his death and it was clear how ill he was and deservedly he was nominated for a BAFTA.

Tough, sharp and exciting this crime drama is heavily influenced by Heat (1995) but manages to have a style and narrative unique to itself. This is what good adult crime films should be like, strong characters that have a believable story arc and action set pieces that are grittily realistic and exciting. This was Ben Affleck's second feature in the director's chair and like his first directorial effort, Gone Baby Gone (2007) it shows a skill and flair for creating character based action infused drama. Set in Boston the armed robbery capital of the world. Affleck plays Doug, a skilled bank robber who runs a tight crew that includes his childhood friend Jem (Jeremy Renner), who can be a little crazy. After pulling a bank heist they briefly take the manager, Claire (Rebecca Hall) hostage to secure their getaway. She is released unharmed but Doug becomes attracted to her and sees her as his way out of the life of crime. But he's under the control of a crime boss and has to plan more heists before he can make his new life. The film has three great robbery set pieces and one of them involves a great car chase. It's violent but never gets near to gratuitousness although some of the death scenes are very realistic. The cast is exceptional and includes Jon Hamm as the FBI agent hunting the gang, Blake Lively as Doug's junkie girlfriend, Chris Cooper as Doug's father and the late, great Pete Postlethwaite as the crime boss, Fergie. This is topnotch and definitely one to check out if you've never seen it, an impressive crime film.

The most recent directorial offering from star Ben Affleck is not unlike his debut movie Gone Baby Gone. Set in the violent crime-ridden heart of Boston, Charlestown The Town tells the story of a young man’s desire to escape the inevitable pull of the criminal underworld in his neighbourhood.

Affleck plays Doug MacRay, a thief who becomes involved with the once kidnapped bank manager of a previous heist. His affair with Claire (Rebecca Hall) leads him to question his own motives and desire to remain in the dark underbelly of Boston. Under this fog MacRay and his companions plan their next, and what MacRay hopes to be, final heist. However an FBI Agent (Jon Hamm) is hot on their heels and the tyrannical world of organised crime begins to crumble around them.

In many ways the movie highlights some very real issues facing many a young American, it questions the inevitability of a criminal future in some of the US’s poorest areas and asks what one is supposed to do when both family and need force you into unpleasant situations.

The film is clearly meant to be a troubling thriller, however it’s scenery seems to lack the truly seedy and gritty edge required to truly drive the message home. The film also lacks the elegance and subtlety of many an older thriller which leaves it feeling a little infantile. The action sequences are as you would expect them to be; violent and in keeping with their contemporaries. The film has a distinctily water-down feeling to it, making it feel as though it is more a cops and robbers movies for young men than an intelligent thriller for a more elite audience. This is not to say it is dumb or dull at all, just somewhat predictable.

Overall the movie is adequate, enjoyable and intriguing, yet it bares no comparison to dark noir-esque roots and is, in many ways, a disappointment after the painful excellence of Gone Baby Gone.