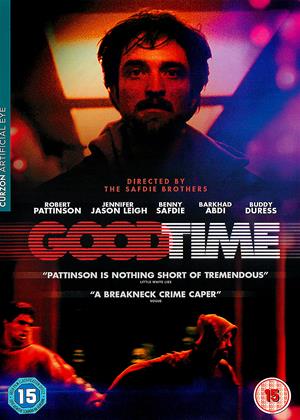 Just thought I'd give a positive perspective. - Good Time review by RW

This is not a mainstream film, it is way too chaotic for that. It is strange, confusing and at times somewhat ridiculous but I would not call it boring. There is so much going on, the dialogue, direction and sound are all in your face, with the score by Oneohtrix Point Never high in the mix adding to the disorientation. Not everyone will enjoy this, though I did.

I can see why some would find this low budget movie not to their tastes as it is gritty and not up there with its glossier stablemates of crime/robbery genre. It does, however, have a street level feel to it and a seam of authenticity. Much of crime culture is mundane and populated with fools, not glamorous but seedy and sad. Note the dopes who end up in jail. Not many calculating geniuses amongst them.

I enjoyed it but then I am fed up with far fetched violence films anyway and the general glamorising of gangsters.

I don't recall ordering this, it was terrible. The plot, the acting, the sound quality. A real waste of time.

This film is just rubbish don't bother Poor film Poor acting story pathetic the films Im getting in recent weeks are just terrible as i say don't waste you're time with this crap?

An in-yer-face tour-de-force of extreme hand-held close-ups that soon becomes too wearing to watch. The plot concerns two brothers, one of them mentally handicapped, who botch a bank robbery. You don’t want to spend time with such despicable characters. The dialogue is atrocious. The direction is amateurish. Pitched as a thriller, it’s anything but. Much of it is a visual mess. It plays like an experimental film by a student who needs more mentoring.

Robert Pattinson is a charismatic actor who makes some interesting film choices, but even he can’t hold this one together.

Far from a Good Time to be had watching this B movie mess. I didn't even have this on my list, CP very kindly sent it to me, perhaps they thought the disc was getting a bit lonely. Either way I certainly didn't list it, and watching it proved my judgement correct.

Noisy, shaggy-dog story. Unfulfilling and with leaps forward and back in the telling. Give it a miss.

An excruciatingly long indie thriller directed by Ben and Josh Safdie that’s somehow just 100 minutes long, Good Time is shot without a steadicam, largely told within a claustrophobic and grainy series of close-ups and mid close-ups. It adds to an increasing sense of irritation and tedium, compounded by a janky, loud electronic score that contributes to a feeling of nausea, as do the lack of witty lines (instead we’re subjected to a never-ending series of f-bombs). Ben Safdie is pretty good pretending to be the protagonist's disabled brother, properly conveying the physical heft and emotional vulnerability many of us have: it’s just a shame that he didn’t focus on the screenwriting and sound editing instead.