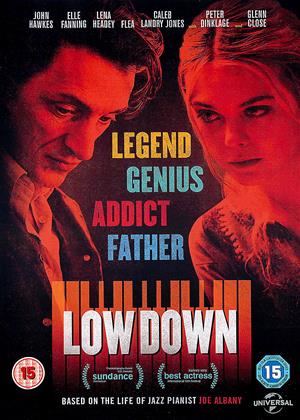 Synopsis:
Low Down, based on Amy-Jo Albany's powerful memoir of growing up in the care of her gifted, tormented and frequently absent musician father, the bebop jazz pianist Joe Albany, focuses on the years 1974 to 1976, when Amy (Elle Fanning) had few resources other than the love of her aging grandmother (Glenn Close) and a ragtag bunch of Hollywood outcasts and eccentrics that were her friends. While Joe (John Hawkes) struggles to find gigs, maintain his heroin addiction, and stay out of jail, Amy grows up quickly in a single-room occupancy hotel on the fringes of Hollywood.
There she bears witness to heartbreak and tragedy as well as soaring jeauty and joy in the jazz music that shaped her, the city and its denizens that nourished her, and the loving bond with her father and grandmother that kept her alive.
Actors:
John Hawkes, Elle Fanning, Glenn Close, Peter Dinklage, Flea, Lena Headey, Caleb Landry Jones, River Ross, Taryn Manning, Billy Drago, Tim Daly, Myles Cranford, Burn Gorman, Sandha Khin, Eddie Rouse, Dane Farwell, Ray Lykins, Linda Wang, Ricky Martinez, Rain Phoenix
Directors:
Jeff Preiss
Producers:
Albert Berger, Mindy Goldberg, Ron Yerxa
Writers:
Amy Albany, Topper Lilien
Others:
Christopher Blauvelt
Studio:
Universal Pictures
Genres:
Drama
Awards:

Reviews of Low Down

A career in jazz has to be hell. From its long-running commercial failures to the copious amounts of drugs that follow, jazz artists seem to suffer more quietly than the loudest rock stars or boldest rappers. Joe Albany is another great of the genre that was wonderfully gifted, but tragically flawed. He seemed to be just another legend lost to the typical shortcomings of his fellow artists, but his daughter Amy-Jo preserved his memories in her emotional memoirs.

Now her recollecting words are beautifully transcribed to the screen. As a teenager, Amy-Jo (Elle Fanning) lives in her father’s apartment during the 1970’s. She loves Joe (John Hawkes) simply because he’s her dad. She doesn’t quite see a drug abuser who has a problem with heroin, a poor artist who is terrible with money or a troublesome man who has scuffles with the law. These appear as just normal quirks to her. She turns slightly silent for those darker moments to see through to the brighter ones. The lazy weekends of sleeping in and cooking breakfast are her more treasured memories than when Joe hangs around his junkie friends.

But the darker moments become more visible the more she interacts with the tragic souls around her. She shares a pleasant conversation with a charming neighbor of the complex played by Peter Dinklage, but soon discovers that he dabbles in perverted acts behind doors that should remain shut. Her alcoholic mother display all the filthy abuse brought on by her drinking. These are painful people to be around at their worst, but mostly because she’s not used to seeing them in such a light.

She befriends a boy in the apartment lobby who is waiting for his prostitute mother to finish with a client. They sit next to each other in silence watching cartoons. Neither of them talk about their parents or share experiences. They know what their current situations are and just want to bond in the simplest ways. The boy’s mother soon finds them in the lobby and plops down next to them, cozying up to her son as she closes her eyes. There is warmth in their worlds, but it comes in sporadic segments between crippling addictions.

Director Jeff Preiss, who previously directed the superb jazz documentary on Chet Baker, lovingly crafts Amy-Joe’s microcosm of the 1970’s. He uses plenty of browns and golds for apartments that seem to be bathed in cigarette smoke. The soundtrack is packed with an abundance of soft and somber jazz melodies, perfectly fitting Amy’s perception of a dire situation she does not see as such.

The performances are top-notch for this coming of age story the way Elle Fanning inhabits the role of the quiet and emotional Amy. Aside from some very small narration here and there, Fanning does all the talking in this picture with few words. Watch the way she becomes entranced by her father’s piano playing in a club. She can see what few acknowledge in Joe as a true artist of high talent. She’ll put up with his binges and scuffles if only to be with her papa for those fleeting moments of brilliance and kindness. John Hawkes should also be given credit for his role as Joe, dashing when sober and a mess when intoxicated. Though controlled by his vices, you can still see parts of his character that wants to be there for Amy. She will soon be an adult and won’t be able to look away from his shortcomings as slight errors. They’re both worried about each other and are not too sure how to deal with it.

Low Down may be another sad tale of a jazz great’s descent into drugs, but one that is uniquely told from the perspective of his daughter. You feel all the pain of Amy’s plight with her surroundings, but also all the love she has for her dear old dad. It’s one of the most empathetic biographies in how we just sort of watch Amy’s situation and try to identify with it. She never has a moment where she has to shout out her pains or explain why she loves her dad. She just does and let’s the audience find out why for themselves.