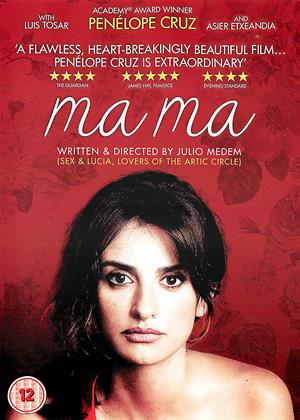 Synopsis:
When unemployed teacher and single mother Magda (Penélope Cruz) is diagnosed with breast cancer, she begins to doubt everything around her. While watching her son play football she meets talent scout Arturo (Luis Tosar) who takes a shine to both Magda and her son. When Arturo receives a phone call with news that his wife and daughter have been in a car accident, Magda goes with him to the hospital. As she has told no-one else of her illness, Magda decides to confide in Arturo and the two grow closer, bonding over ill fate. When she discovers that she is pregnant Magda realises that she has something to live for and changes her ways to ensure she is around to see her daughter grow up.
Actors:
Penélope Cruz, Luis Tosar, Asier Etxeandia, Teo Planell, Àlex Brendemühl, Anna Jiménez, Elena Carranza, Nicolás De Vicente, Silvia Abascal, Miguel Mota, Virginia Ávila, Javier Martos, Anabel Maurín, Samuel Viyuela, Ciro Miró, Safi, Mónica Sagrera
Directors:
Julio Medem
Producers:
Penélope Cruz, Álvaro Longoria, Julio Medem
Writers:
Julio Medem
Studio:
Metrodome
Genres:
Drama
Countries:
Spain, Drama

First of all, this is an outstanding performance from Penelope Cruz in this subtitled Spanish film. As Magda she's the central character who is left by her husband, discovers she has breast cancer and needs a mastectomy, discovers she has untreatable secondary spread to her lungs, becomes pregnant by her new partner and gives birth to a daughter before dying a few seconds later. In this process she is surrounded by three men who love her. These are her new recently bereaved lover, her gynecologist (whose relationship with her does stray on the side of unprofessional) and her football star in the making son. All of them perpetuate her memory by caring for the baby daughter. Even the relationship with her ex husband seems fairly amicable. There's also a strange theme running through of the image of a little blonde Russian girl who her gynaecologist fails to go to adopt and who comes to symbolise her wish for a daughter and gives her name to the baby. So in terms of plausibility, this film's got nothing and it is seriously schmaltzy, even having songs by her gynecologist in there. But in its defence this film does deal with the fairly taboo area of breast cancer and terminal illness without compromise and without being a tear-jerker in the process.

The film manages to be both inanely sentimental and amateurish, a waste of Penelope Cruz's talent. It presents a very sanitised view of cancer and terminal illness, in fact it could be very upsetting for anyone who has experience of this and knows the messy and miserable reality of serious illness. I began to wonder whether it is supposed to be a magic reality fantasy after the style of Lorca, but it does not work. Well worth missing.

The characters were weak and the plot pedestrian and predictable.  I only watched it to practise my listening skills as I am learning Spanish, so the time wasn’t entirely wasted!

It is a beautiful and moving film that at times is very sad and at other times a joyous celebration of life. Best film I have seen in a long time.

Ma ma is a feeble exercise in melodramatic tendencies, sprinkled with a laid-back attitude on top that pushes for sentimental value almost too much for its own sake. A mushy brew of irrational decisions that ultimately carries a hazardous, if not a naive message about the nature of a terminal disease that has nothing to do with reality. Ultimately, whilst well put together, Ma ma commits the gravel sin of romanticizing a topic too serious to be taken so lightly.

Julio Medem at the helm drives this film with Penélope Cruz on deck, which proves more than capable to get the job done, efficiently and with heart. However, no amount of good acting can salvage a script that pushes for tragedy whenever it gets the chance to do so: Cruz as Magda’s life goes from bad to worse and instead of alluring empathy, it ends up fabricating disgust. The reason behind this can be traced back to Aristotle’s Poetics, which goes something along the lines of ‘make your character as humanly real as possible, and the rest will follow’. Since Ma ma is everything except real – the tragedy is (subconsciously) interpreted as lazy, unmotivated writing that slaps illogical stamps onto the previously perfect life of one middle-class, law-abiding citizen Madga (The Book of Job perhaps?).

Furthermore, director Julio Medem’s imagination does not only stretch seemingly sinful mishaps to (implicitly) banal cessations, but he also cloaks them by sporting a deceptive manner most other film coaches would plead guilty to. Thanks, but no thanks.

The film’s first two acts (yes, Ma ma follows the infamous three part structure) holds up somewhat thanks to Penélope Cruz’s riveting performance, but she alone cannot salvage the emotional in-your-face wreckage that is about to come in the third and final act. As events intertwine between each other, Magda stays positive even in the face of death, and one quickly loses all sympathy for her character since no sane person would act the way she does in the film. And when viewers cannot connect to an emotional level with a fictional effigy: you know you’ve messed something up.

Ma ma not only glorifies adolescent naivety, but it also detaches itself from all things human – ending up an empty fairytale that makes the titular character encounter a destiny they do not deserve. Magda’s optimism laughs in the face of those most affected by similar illnesses, and fails helping them to reach their true potential while possible.

As a story, Ma ma is too incredible to be taken at face value. As a fairytale, Ma ma fails to provide excitement for the masses.

As a coherent structure of visuals and sounds, Ma ma is just not worth it.