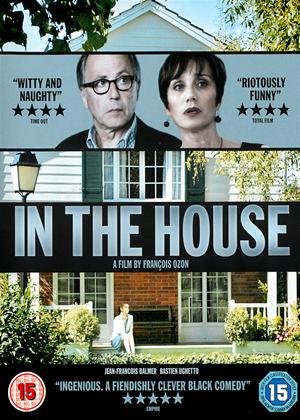 Reviews (4) of In the House

Why not tell us the movie is n French? - In the House review by AW

A polished French production - In the House review by BE

An original little movie, well acted and seamless throughout. It will have you baffled and mesmerised at the same time, swinging between reality and fiction. You may want to watch it twice to get the full intricacies of the storyline

A clever plot - In the House review by Le

I loved this film, enjoyed it being in French as it was so French in character. It was cleverly constructed, playing about with point of view and making you wonder what would happen next.

excellent French film - In the House review by SP

Subtle plot that nevertheless keeps you guessing. Fine acting from both the younger and older actors and, for anyone who likes their films in French, beautifully enunciated. I thoroughly enjoyed this little gem.

A fifteen year old boy insinuates himself into the home of a fellow student from his literature class and uses the relationships and events he witnesses as content for school essays; however the presence of the newcomer causes a ripple effect within the household and under the gaze of the French teacher Germain (Fabrice Luchini), previously disparaged by the quality of his students work and now reinvigorated with this new and intriguing exploration, that new and unpleasant events begin to unfold.

Based on the play by Juan Mayorga In the House is a black comedy with a dark undertone that is brought wonderfully to light through the performances of the central characters, notably Ernst Umhauer as Claude the voyeuristic and isolated teen, Bastien Ughetto as Rapha, Emmanuelle Seigner as Esther, the son and mother of the so-called “perfect family” and Luchini and Kristen Scott Thomas as the teacher Germain and his wife.

The darkness is inherent in Umhauer’s Claude and it is his calculated manipulation, driven under the careful but liberal hand of director Francois Orzon that really gives the film its weight. Germain and Jeanne’s (Scott Thomas) slow weaving into the narrative is also expertly handled by both cast and director, helping drive the story forward with a genuinely gripping ease.

To the film’s fault however there are occasions where both narratively and cinematically the film gets a bit too big for its boots; trying to be overly clever and dupe both audience and characters spoils some aspects of the movie and causes things to become a little too twisted up for my liking. The constantly shifting darkness of the manipulation is complimented brilliantly with a playful and provocative overtone however and it is Orzon’s excellent handling of the film’s multifaceted themes and genres that makes this such a watch able and enjoyable piece.