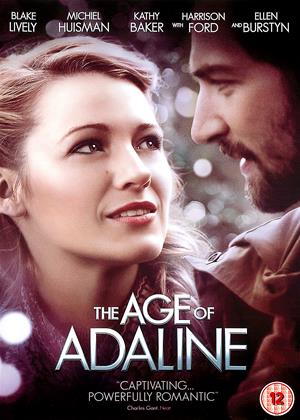 Reviews (3) of The Age of Adaline

Stunning recreation of decor and fashion of last 100 years.

Loved the story line even though it was unlikely to take place.

First film that I have watched agin before I returned the rental disc.

nothing happens - The Age of Adaline review by KA

Boring chick flick - The Age of Adaline review by Cliff

Not so much a story as an idea spun out into nearly two hours of morose dreariness, ending just the way you thought it would all along. I had to leave after the first hour - my wife endured to the end. She gives it an extra star for Harrison Ford.

The Age of Adaline review by Adrijan Arsovski - Cinema Paradiso

In its goal to shed more light on the perennial matter of immortality, Age of Adaline goes hard against itself and almost dissolves its own ambitious premise into an overly sentimental, albeit often times poignant -- re-telling of a stripped near-tragedy without any real stakes or tangible consequences.

Age of Adaline starts with a well-known premise, combining several literary and film devices to turn Blake Lively’s character to a protagonist that doesn’t age. The how’s and why’s are neatly explained via third person narration, through bogus, but fun science nonetheless. The beginning is handled rather well, with sharp cuts and edits that aesthetically trump the movie’s second and third act.

From then onward, the movie plays a lot like a homogenous mixture between Groundhog Day’s romantic slant (1993) and The Curious Case of Benjamin Button (2008) times infinity, with emotions of similar potency threaded throughout all three. In this regard, Age of Adaline surely evokes nostalgia, melancholy and regret, but in the second act quickly stumbles on its head and becomes a date movie – checking all (and breaking some) marks of a well-known Hollywood recipe for drama.

One example of missed opportunity is Adaline’s devotion to a simple life and her (symbolically and otherwise) running from potential love and attachment. Surely enough she avoids society because she’s different and afraid: but instead acts, walks, talks and flirts as quite the opposite of what the audience is told it’s true. And while it’s not fair to pick on what the movie isn’t – the script only scuffs its chance to build upon Adaline’s fear of ultimate loss, and alternately goes for the easy way out.

The main part of the movie shows flaws: Adaline decides to break her own rules and goes out on a date with Michiel Huisman’s character - Ellis. And who can blame her: he’s hot, rich, smart and clearly plays ‘true love’ personified. At this instance the audience may feel tricked as melodramatic events unravel before them – this turns out not to be true however as Adaline battles within herself – but nevertheless this battle doesn’t last long and she opts for ‘true love’ instead. The audience ended up tricked, Adaline – nonchalant.

What follows afterwards is the most baffling love triangle to happen in quite a while on screen. Without spoiling anything: seeing Harrison Ford’s character is rather amusing, with his gestures and mannerisms strongly resembling the naively good olden times.

And needless to say, Age of Adaline is not in any way a bad movie: somewhere toward the end it shows some potential of redemption – only to end up disregarding real human drama in favor of the nearest fairytale – a perfect piece for recent darlings.