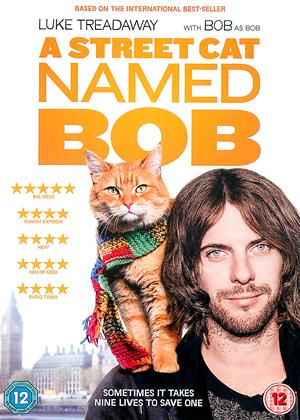 Shows it can be done, with help. - A Street Cat Named Bob review by NC

Had to give it a 4, just to spite the never ending junk coming out of the US. Often with so called big names, earning big bucks, for swearing and hitting folks...or shooting, as appears to be the main hobby over there.

Amazing to see that there IS actually a system in place that can help those that can take it on. Film does show the devastating affect that drugs can make on society, and individuals/families.

Simple film with simple story. Alas the guy here is a very small minority of those that can make it out of the vortex of the street, and hats off to people that constantly try to help them. It must be like standing against the tide for sure...........

Do animals come into our lives to help us? Of course there are many who would say absolute nonsense. I on the other hand think animals have a much deeper understanding and relationship with their human guardians.

Luke Treadway plays a heroin addict who is on a methadone programme trying to beat the habit. Of course this is easier said than done given the terrible hardships of living on the street, resulting in him falling of the wagon. His social worker sees something positive in him and despite this setback finds him a small apartment.

Settling into his new abode he's confronted with a stray cat. From here on in his life changes. There are still plenty of hardships to face but his love for the feline Bob in his new strength in the fight for a better life.

Entertaining film about a wonderful cat and his recovering pet human...MIAOWS + HEADBONKS! - A Street Cat Named Bob review by PV

Good things about this film:

1) the inspiring true story of James Bowen (a man from a well-off family who, for various reasons and none, became a drug addict on the streets BUT THEN made the 'up the hill backwards' journey back to being drug-free) after meeting a lost, homeless cat - the symbiotic relationship here, the way their stories mirror each other, is nothing short of perfect - for story anyway.

2) the film is very well cast with Luke Treadaway perfect in the lead role - in fact, if this were a Hollywood movie and esp if Luke T were black, he's be a shoo-in for the Oscar! The fellow junkie Baz is also well-cast with Welsh actor Darren Evans (also to be seen in the soon-to-be-released film CHARIOT;

3) it is genuinely funny in places and touching, though some parts are NOT how they happened in real life (James met Bob outside on the estate, for example.

4) The way the film really does show how utterly awful the menace of drugs is, as is the desperate homelessness it causes where people - esp the kebab seller - are unimaginably cruel;

5) Bob the Street Cat himself - a cat who has obviously been raised on the street so who is not phased by traffic, people etc. It's the best cat story I have read other than A CAT CALLED DOG by Jem Vanston.

Bad things about this film:

1) It exaggerate the role of James' kooky female neighbour, I suppose because the screenwriters and directors wanted a love interest - I found this irritating and boring;

2) the sometimes cartoony feel of scenes, like the mouse emerging for a cartoon mousehole in James' flat's skirting board - are these scenes really needed?

3) Sometimes one feels the scriptwriter has piled up the obstacles - as all screenplay books says one must - to make James' challenge even greats BUT is there any need to make things up in a story like this?

4) the agent saw James outside Covent Garden and signed him for a book - she did not see it online.

5) AND it is worth remembering that the publishers have milked this dry, and made most of the money from 5 million sales - James Bowen himself will have received the tiniest fraction of profits from that (but as sales have been so huge he's still lucked out and could buy a house in London which most people cannot afford).

So, in general, a good film from what has become a publishing phenomenon - which has unfortunately spawned a huge industry of what I call "pity party cat books" where a cat (sometimes real; sometimes reincarnated) appears and saves someone or a family from: homelessness, illness, autism, library closure etc etc etc. I am so sick of these books now.

But 4 stars. A flawed film but also enjoyable to watch, esp for a cat lover like me! Go Bob!

We watched the film on a rainy afternoon, perfect.

Laden with clichés and cut-out characters. Glossy and "Notting Hill-ed" for Hollywood no doubt.

Yet, if you park your expectations, it is a simple tale of a raw-edged hiding to nowhere who came good.

We all need happy endings now and then and this film wormed its way into our hearts.

I have read the book and the film was (mostly) true to it. Bob was marvellous and other characters credible. It shows the horrors of the downward spiral of being on the street and on drugs, and that it is possible to find a way out. I now see those selling "Big Issue" in a different light and often buy it.

A good lesson to our sometimes hard society.

We loved this film so much we watched it twice.

Great feel good movie and all the better as its a true story. I had read the story of James already and so knew what to expect but the acting was great and there is even a cameo appearance of James at the book signing.

Think we all need a cat called Bob !!

Just knowing this film is based on fact a relationship between a man and cat is worth watching. A bond that enriched their lives in a positive way. It was such a joy to watch their interaction and also how many other human lives Bob the cat had such a massive positive impact on.

This is a really uplifting movie and a story of hope and determination to get back on your feet.

Based on a true story, this movie has emotion on various levels and a main character (Luke Treadaway) who puts in a perfect performance to draw you into his life and at times desperate situation.

The relationship that is built between the leading character and ‘Bob’ the cat is touching and in a way they both end up saving each other’s lives. On top of this an affectionate friendship is formed with a caring young women, while at the same time the leading character struggles with his past life and acquaintances (his drug depend friend and his own fractious relationship with heroin and his deprived life).

A very good movie that touches on all levels of emotion and ties in with a situation that many face in today’s world. Excellent watch!

A Street Cat Named Bob is a heartwarming true story about a guy named James and his cat Bob trying to survive amidst the urban jungle that is London. And let’s be honest here: whatever scene was is – Bob stole the show completely. Although during filming several other cats were used, Bob is the preferred tomcat by a large stretch of a margin. To sum it up: A Street Cat Named Bob comes off as an upbeat drama feature that will move you to tears.

Firs off: A Street Cat Named Bob doesn’t nurture any bigger-than-life conflict(s), nor does something from such proportions would hold true to the films form. Instead, it mostly plays like a feel-good story that a certain bard is reciting around a campfire in order to kill time. The story just happens to be a good one. And for being James Bowen's autobiography, A Street Cat Named Bob hits home on several occasions worthwhile for someone’s time.

The film follows James Bowen, who is a homeless bloke that struggles with drugs, mostly heroin. He and his father Jack Bowen (played by Anthony Head) were then surviving a quarrel that was leaving both of them emotionally devastated. Deep down however, none of what they said and did toward each other was given so much rational thought – so it was only logically that they went their own separate ways.

After which, James became homeless and reached for drugs to find his only solace in life. But, as things in life were growing darker for James in tone, so did a time for a second chance was nearing toward his aura.

Then, out of nowhere, came along Bob– a stray cat whose sheer presence made James feel as if luck has finally struck a chord with his destiny’s strings. As to how and why Bob choose James – to this day remains a mystery even to his owner. But, it seems Bob enjoys the company of James, and together they make the unlikable duo that both Londoners and tourists seem to adore.

One caveat I would mention is James’ added love interest that is just there to provide a counterpoint to the suffering he has been through life. As Luke Treadaway (the actor who portrays James Bowen) sings his way into fame and novelty, Betty (Ruta Gedmintas) starts showing interest in an ordeal that mostly feels forced, if anything. Again, who needs a gorgeous female companion when you have the best looking feline companion? Heh heh.. No? Ok.

Case in point, A Street Cat Named Bob written by James Bowen himself (screenplay credit goes to Tim John and Maria Nation) and directed by Roger Spottiswoode is a sure contender for a guaranteed place in your heart, no matter how cruel or crude your personality may have been beforehand.