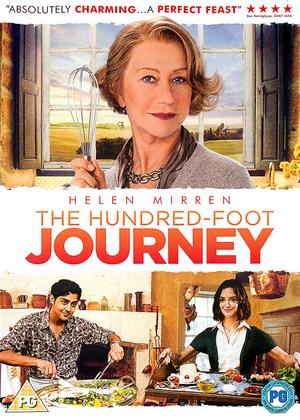 Reviews (4) of The Hundred-Foot Journey

This really is an awful film - schmaltzy fantasy slush, aimed at a US female market, I think (and produced by Queen of Schmaltz Oprah Winfrey and also Spielberg).

It is offensive in many ways too. Firstly, it persists with the - frankly - racist myths about bad British food. It is utterly untrue that, as the main character here argues, British vegetables 'have no taste and no soul'. Maybe he should remember that it was actually the British who introduced tea-drinking to India and also, with other Europeans, gave India potatoes, tomatoes, and even chillies (native to south America NOT Asia!). Also, the fact is no Indian restaurant (even one serving British Indian food - which is a British creation) would survive in rural France, where people don't like spicy hot food and are deeply conservative, eating what they know (and where a lot of the French would be deeply racist against any incomer Indians). But never let the facts get in the way of a good racist anti-British rant eh?

Also, the movie promotes the lie that it always rains in England (in fact London gets less annual rainfall than Paris or Rome!) and that the UK is 'cold'. No it isn't! The British climate is maritime and changeable BUT it is never extreme. You want cold - go to new York or Berlin!

The film is written by Stephen Knight - and if this is the same guy who wrote Dirty Pretty Things then he has fallen far indeed. It's a painting by numbers script, with VERY unlikely romantic relationships mirroring others, and utterly unbelievable character arcs meaning goodies become baddies and vice versa, up until a predictable Hollywood huggy third act. I had hoped that the 'baddie' chef may come back to wreak revenge, and pierce the big bubble of balderdash and saccharine fairy tale this film descends into, but no such luck.

No doubt many middle aged sentimentalist women will love this film, and identify with Helen Mirren.

Me, I feel I wasted 2 hours of my life watching an overlong, lazy, schmaltz-fest which, incredibly, ends up being racist and offensive. Want a food movie? Watch Babette's feast or Eat Man Drink Woman - not this trash.

Seen it all before - The Hundred-Foot Journey review by DJ

I agree with the sentiment that its jumping on the Slum Dog bandwagon. A "nice but nothing " film. A story line of underdog makes good but with no heart , humour or drama. As suggested , made for the female market and will probably pop up on Tv in the usual afternoon slush slot.

Since Slumdog and Exotic Marigold, there seems to be a bandwagon rolling. Spielberg and Opra seem to want to make a few bob for just jumping on and gliding to the bank.

How anyone can call this film 'racist' is totally beyond me! I found the film to be a very pleasant watch - Helen Mirren as always

Based on the novel of the same name by Richard C. Morais, comes the feel-good 2014 film The Hundred Foot Journey. This Comedy-Drama is surprisingly produced by Steven Spielberg - and not so surprisingly by Oprah Winfrey. Whether you are a lover of exotic cuisine, or just want to watch a good story, this is one you will want to see.

The film follows the Indian Kadam family who have lost a lot in their lives. Food is what compels them to carry on, and it is where the next part of their story takes them. After fleeing political turmoil back home, where they lost both their family restaurant, and their mother, they find themselves in France. It is here that they decide to establish their next Indian restaurant, right across the road from the Micheline Starred Madame Mallory. As could be expected, the rivalry is fierce, and the mere hundred feet between the two does little to stop the escalation. Can Hassan and his love-interest-and-rival Marguerite find a way to bring peace to the two establishments, or are their differences too much to handle?

I am not a cook and do not like watching cooking shows, but it did not feel the same in this film. The story and character progression managed to keep me engaged during the food scenes, and made it more than what I originally thought it would be. The script was funny with witty dialogue and a genuinely good story. The love story, though, felt a bit like it had been included almost as an after-thought, and was a bit cliche. The film also runs just over two hours, which perhaps was a bit too long.

An Englishwoman playing a French chef, faces off against an Indian family, which is all directed by a Swiss director. This is a great example of multi-cultural filmmaking. Pretty much since Slumdog Millionaire, there has been a lot of film combinations that include Indian storylines and characters. It is very interesting to see and I can’t wait to see more filmic culture combinations.

Helen Mirren was the only name that I recognised from the cast. Despite not having the most believable French accent, she still was her usual amazing self. In fact, everyone was fantastic. Mirren is the only one nominated for a major award, which is a bit absurd seeing the high quality of performances all around, but I wasn’t expecting it to be featured at all. Not that it wouldn’t deserve it.

Despite most audiences thinking aspects like the soundtrack and cinematography are minimal decisions, they are actually extremely important to the feel of the film. The mix of music from the different countries, and the colourful contrast of the restaurants were beautifully done.

The film has done extremely well at the box office with generally positive reviews.

Some of its contents are inappropriate for younger audiences, but there is nothing overly unsuitable for the larger audience. Enjoy!