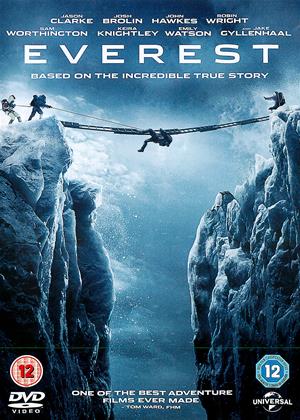 Not unbalanced - Everest review by AM

Jon Krakeur's original account (Into Thin Air) of this true story, where he was a journalist being taken up Everest as part of a guided expedition, provoked a furious response in the form of another book 'The Climb' from Anatoli Boukreev, a guide who felt Krakeur's book had unfairly criticised him and other guides. It would be interesting to see what Boukreev, who has since been killed, made of this film. Having read both books, and having some sympathy for Boukreev's perspective I was curious to see whether this film would take sides. I was also terrified they would try and ramp up the action, ignore the tragedy and try and turn it into Cliffhanger. Thankfully, I think it's pretty well balanced, and indeed well-made. The script writer appears well aware of the controversy and tries to tread a middle ground.

If I have criticisms (and obviously I do at 3 stars) it's that it perhaps lacks the heart to truly engage - the characters (sorry, real people being portrayed on screen) lack empathy and the attempts to do so don't really take for me. (unlike Touching the Void, for example)

But if you watched it and want to know more, read both books - not just one.

It's not always clear who is in a scene, why they do or decide to do something, or where they are. It would have made a great documentary, but as a movie, it's nothing special.

An engrossing, well-mounted account of an ill-fated 1996 Everest expedition. Director Baltasar Kormakur insisted on keeping it real. ‘Please, no acting,’ was his instruction to his actors. The cast dutifully immerse themselves in the snow with gusto and even the Italian Alps make a great understudy for Everest itself.

It seems churlish to carp, but the film’s attempt to remain authentic and true to its real-life participants makes it not without flaws. Firstly, when we’re impatient for the action to start, there’s a long flashback that sets up the backstory of the main participants before they hit the climb. Others in a large cast are so poorly sketched that when there’s a reference to them we don’t who they are. Like Everest itself, the cast is overcrowded.

Secondly, mountaineers wearing heavy gear and goggles in a storm are difficult to distinguish from each other. Among the bit players especially it’s often hard to know who’s who. All of this diminishes audience involvement and makes the viewer feel guilty for not feeling more when a ‘minor’ character (based on a real person) dies.

Given these caveats, Everest is well-made and remains one of the better fact-based mountaineering films.

Fairly decent mountain movies, but with too many poorly-drawn characters - Everest review by PV

Like most who have reviewed this film, I think it's a fairly good watch.

The scenery is stunning, for sure.

The main problem is too many poorly-sketched characters, some of whom look alike - and often shown in blizzards in Everest, so it's really a case of the man with the red jacket dying and the man in the blue jacket surviving.

Still, it's based on a true 1996 story, so I suppose it had to get in all the characters.

Co-written, I see, by Simon Beaufoy (who wrote the Full Monty and many films after that).

3 stars. Not bad, but not great. Want a great mountain film? Then watch TOUCHING THE VOID.

Good movie great watching it on 85 in screen with a projector and 3d classes.loved the scenery bit sad at the end

This film was really good and interesting, yet a little sad as its a true story. It showed how much it means to people to achieve their dreams of climbing these huge mountains, despite the danger involved. Dedication is shown in this gritty film.

Great story, flawlessly told. Obviously they couldn't film on Everest other than around base camp, but the higher up stuff, especially in the 'death zone' is totally believable.

An excellent tribute to those that lost their lives.

Well told story of the challenges of tackling Everest and well portrayed of the real life characters. Quite shocking to realise how many lives Everest has claimed. Of course, very beautiful setting.

Very good film based on true story, very gripping story and really shows how dangerous this is and how many lives have been lost.

There's good bits - the cinematography is excellent, and the surround sound is superb especially in Dolby Atmos. It starts off as a regular disaster movie, getting to know all the characters as they travel to the region and setting the tensions that will surface later. But then when it all gets exciting, the film falls apart, mainly because of the attempted realism of the film.

If you're in a howling blizzard and gale and shout to your colleague, there's a good chance he won't hear what you said. The film is just like this and is what first brings the movie down. Three of us watched it on a calibrated surround system and all of us couldn't make out much dialogue in the external scenes and had to use the more intelligible base camp dialogue to try and work out what was happening, failing more and more as the film wore on.

The second film problem was that the characters couldn't be identified when covered in weatherproof suits, hats, hoods, face masks and oxygen masks and covered in snow, so identification of individuals then went out of the window. We think there was a rescue effort mounted going by the base camp dialogue, but shots of climbers stuck on the mountain didn't reveal which lot they were, were they going up or down? So as the film went on we lost track of the dialogue, then the identification of who was who and where, and then we ended up laughing so much as we all said "pardon?" at the same time and it turned into a farce.

So glad we didn't go to the cinema to see this.

Not Ted Moults life story. Not bad film,got it's peaks and troughs. And up's and downs.