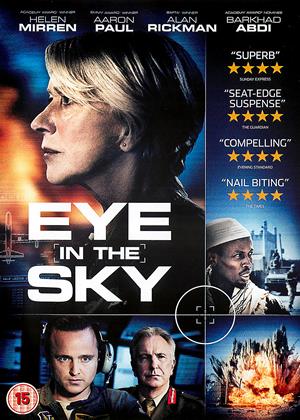 great - Eye in the Sky review by JJ

A fives star movie! I loved it a great story, gripping, upsetting, dangerous, nervewracking...... Up to date story Amazing actors & a really gritty plot, you cant wait to see what happens next.

This film presents a new moral dilemma as warfare becomes more "remote" with drone strikes. What I loved about it was that it chooses one small fictional situation and explores all the implications of this one situation. The economy of the plot reminded me of Greek tragedy, so I looked up "unity of action" which is one of the principles on which Greek tragedy used.

"The Unity of Action limits the supposed action to a single set of incidents which are related as cause and effect, "having a beginning, middle, and an end." No scene is to be included that does not advance the plot directly. No subplots, no characters who do not advance the action." Apologies if you already knew this. I feel this applies perfectly to this film. The tension builds up inexorably, as there is a time pressure on the crucial decision to be made. The dancing girl is a wonderfully played character who, together with the man at the end of the chain of command, who has to pull the trigger, give a real emotional weight to what otherwise would be abstract. Great cast, with Helen Mirren, Alan Rickman and Aaron Paul and all the acting is superb.

Drones are all the rage at the moment, and this film puts them centre stage in the war on fundamentalist terror groups.

The central idea is solid, focusing on a mission in which drone surveillance is first used to help track and capture two major suspects, and which then becomes upgraded to using the drone's weapons to kill the suspects. It is a taut and suspenseful drama, particularly in the first half as we switch back and forth between the many commanders, soldiers, agents, politicians and drone operators involved in the mission.

Where the film falls down in my opinion is (a) by giving far too much weight and screen time to the story of a single innocent girl's fate, and (b) by going on and on in laborious detail about the pros and cons of killing a few innocent bystanders to save hundreds more from suicide bombers. I actually got annoyed in the second half because the plotting was so blatantly manipulated to get the girl into the story, and because, while the arguments put forward by all the different protagonists were compelling, they did not belong in a movie. In trying to be fair-minded and show the many faceted problems of targeting terrorists from 20,000 feet up, the film lost its pace and tension, and became overdone to the point of tedium.

So, full marks for tackling a very current subject, and for at least not dumbing it down in the way movies usually do, but only three stars because ultimately the movie fails to maintain its early promise, and becomes a little too flawed and overly melodramatic to be fully satisfying.

A silly, sentimental, unbelievable and deeply stupid movie in thrall to 'political correctness'. - Eye in the Sky review by PV

To enjoy a drama one must engage in the "willing suspension of disbelief" as Samuel Taylor Coleridge correctly argued. This film shows how veering away from that truth leads to a story that is utterly unbelievable, with unbelievable characters behaving in unbelievable ways. The end result is not pleasure of fulfilment, but deep annoyance and irritation.

This is basically a vehicle for Helen Mirren who is totally unbelievable in a role as the chief of the army or some such nonsense. Well, if she's senior soldier material I'm an Olympic champion! Too silly for words BUT in these pc days the pressure is on for more female leads so this is the mess we get.

Then there are the soldiers - tough US soldiers with years of training and killing experience - and yet, because of one wickle girl selling bread, they turn into blubbering wrecks crying on the job and unable to do it either! Soldiers kill - they do and will, and will kill civilians too if that means it prevents greater catastrophe and killing, So the whole pretext of the plot if absurd.

No doubt the director though it best just to be on the side of the poor people in Africa so we get our noses rubbed in how awful their lives are.

A truly awful film on every dramatic level.

It has good special effects and watching the drones is fun (though not sure I believe the science). Maybe if I am forced to watch this film in my lifetime, I certainly hope I'll be stone deaf by then so I won't hear any of its nonsense.

What a sad finale to Alan Rickman's career. A clunky subplot about buying his daughter a toy doll scrapes the bottom of the barrel then goes right through the wood, as does all this film.

Great dramatic look into the morals behind the extermination of terrorism. - Eye in the Sky review by ms

Both my wife & I enjoyed this film. It shares the dilemma's set behind instituting a drone attack on terrorist. It's a do it , don't do it film & keeps you on the edge of your seat. We really enjoyed it although it left us with emotional thoughts at the end .

Yes Minister at war - Eye in the Sky review by DJ

Not wishing to go too deep into the " meaning etc. " of the film , it was good to see that things do not appear to be straight forward anymore when having to make controversial life threatening decisions - lose one to save loads. Maybe the banter was not totally accurate but when you see the newspaper in uproar when soldiers are hounded by solicitors and tribunals , you can see where the film is going. Will they say "GO " , will the girl survive , not Hitchcock but certainly enough to keep you to the wondering to the end. Not the action film I thought it was going to be but it was a very good alternative. Recommended.

Pv - please note , its a film not a documentary.

a must watch , horrifically compelling movie - Eye in the Sky review by SE

This has to be one of the most horrifically best compelling movies I have seen in a long while. A must watch, on the edge of your seat even though you think you can guess the ending. Do not miss out on watching it.

Tense, intelligent, predictable - Eye in the Sky review by Alphaville

This is a good 2015 film about the moral dilemmas of drone warfare. Unfortunately it was beaten to the punch by the equally good 2015 film Good Kill. Both films place a nice family in harm’s way as collateral damage when the Brits and Americans decide a bomb needs to be dropped on the terrorists next door. Whereas Good Kill focussed on the dilemmas of the drone pilots, Eye in the Sky focusses more on the ethical and political dilemmas faced by the ‘kill chain’ – the military, the politicians and the lawyers as well as the pilots.

Placing an innocent girl at the heart of the bomb zone is an obvious manipulative device but works well as a focal point for the debate. The film could easily have become just another political polemic with a plot you can see a mile off, but director Gavin Hood maintains the tension and turns in an engrossing thriller.

Great thriller - Eye in the Sky review by GT

Enjoyed this film, tight script and well acted. If you enjoy shouting at the screen to release all the tension that is created then this is for you

This was a surprise hit to watch for and I believe it was a British film too. I have to state this film is well paced from start to finish. This film should have got more attention at the box office. This should have got more marketing and publicity. You really won't be disappointed with this film.

Eye in the Sky review by Adrijan Arsovski - Cinema Paradiso

With questioning morals and an overall moot war message aimed at no one in particular, Eye in the Sky still manages to thrill audiences enough so they sit through a whole cinema viewing session. Its dragging decision-making part certainly doesn’t help the ordeal, but at least acknowledges that there IS an ordeal in the first place.

As we wake up every day, we witness enormous advancements in technology, how it’s used and how it shouldn’t, but the goal of war still stays the same. Now, we won’t argue about the ultimate goal for victory on the battlefield (cough: resources) – instead we’re going to ask ourselves the penultimate question: what is war and how it plays out in the life of everyone involved?

Eye in the Sky asks these questions, but it’s really hard for anyone who hasn’t seen the horrors of war with his own eyes to come up with a reasonable answer. Then again, is there a difference between ancient conflict and modern warfare?

The main difference is in the advancements of technology. Biological, tactical and even nuclear warfare impose themselves as THE elephants in the room, with world leaders avoiding in-depth discussion with the public for reasons very clear to all of us: these are tacky subjects able to inflame even the kindest of leaders by as little as a simple misunderstanding, or even errors in translation.

Eye in the Sky is everything about this, and more. It raises the question of the so-called ‘collateral damage’ conundrum, the corrupt bureaucracy of the world organizations and the inept decision-making of intelligence agents when put under pressure.

It does this by introducing three countries working side-by-side: Britain, Kenya and America whose representatives include Colonel Katherine Powell (played by Helen Mirren), Steve Watts (Aaron Paul) and Lieutenant General Frank Benson acted by the late Alan Rickman among others. All actors come as believable enough to re-ignite the audience’s interest after a prolonged decision-making part in the middle, and they succeed in doing so. Out of the bunch, perhaps Helen Mirren is the least believable in her portrayal of a high state official.

The thriller aspect of the movie comes not out of amazing action scenes and prolific explosions – rather it’s the conflict of attitudes that brings the drama to whole new heights. Time is also of the essence, and if a decision is not being made, there can be even bigger consequences than sacrificing one life to save many.

To conclude, and Eye in the Sky is a worthy film of one’s attention, regardless if one agrees with the moral sermons postulated forth all throughout the movie’s running time.