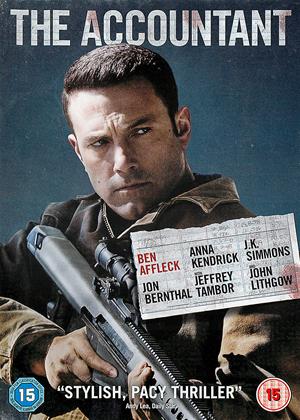 Reviews (7) of The Accountant

This is less a thriller than a character study of an autistic accountant who also happens to be a martial arts and gun expert. It’s never clear exactly what’s going on behind the scenes with our hero’s dealings with unseen crooks and there are only minor bursts of confusing action.

Ben Affleck is fine as the lead but Anna Kendrick as the damsel in distress is intensely irritating as she ums and ahs her way though her dialogue. Fortunately she’s irrelevant to the plot and soon drops out of it. Not that there’s much room for plot with screeds of explanation to get through concerning autism and backstory.

There’s some climactic plot development and action, but it comes too late and you’ll probably find it laughable anyway. There’s even a terrible score complete with ill-judged nauseating ballads. It’s a grown-up film, which deserves kudos these days, but the package needs more thrills than this.

Affleck at his best - The Accountant review by JW

One of the best movies seen this year from Paradiso, so good in fact I watched it again just to fill in the bits I missed first time round. I watched it with my son who is 30 years younger than I and he held the same view it was a great movie. So it could be inferred the movie crossed a very wide age range. Well done Mr Affleck and all who made it possible. Five stars from me.

An immature and dull thriller - The Accountant review by RD

Nearly a decent film, well shot and a decently mixed soundtrack with great explosions and gunshots in the shootouts.

Only they appeared to have had a 14 year old write the script, and his best friend write the screenplay, with the result that the dialogue is embarrassingly "serious" as though a young teenager was trying to guess how grown ups in dangerous situations talk.

The screenplay contained many scenes that didn't seem to fit the story, leaving this viewer wondering if I'd missed something. I don't think I did. The plot was tediously predictable, and there was no humour to lift the dullness of the film.

There were two annoyingly bright stroboscopic scenes, unnecessary and very good for producing epileptic fits in the audience, so watch out for these and be ready to hit the forward button quickly to avoid them.

Muttered and whispered dialogue was occasionally indecipherable, but none of it seemed important so not too much was missed.

The large amount of brains being splattered with associated blood in the gunshot scenes are sadly the modern trademark of a film aimed at young children, with the general rule of "less plot - more blood". This is sadly one of those films.

Have to give this a 5 as not given one for ages. Ben is believable as convert aspergers. Little bit of humour here and there, and violence is not too Peckinpah. Two guns had a mix of humour-with-violence, and not many films can get away with it.

An accountant who kicks ass?? A silly premise, but it very nearly comes off. Just a bit too long with irrelevant characters and a stupid ending, more concerned with setting up a sequel than rounding things off satisfactorily.

Christian Wolff (Ben Affleck) has high functioning autism (the film is slightly stereotypical here). He was lucky to have an accurate diagnosis in 1989, but his father and early life experiences shaped the man he is today. Anna Kendrick's character also has us wondering if she has undiagnosed AS (Autism spectrum or Aspergers, yes it is possible to have mild autism), and a possible romance?

Well worth watching. It had me wondering if there will be another film as the story could develop from here.

A thrilling ride of discovery as the intricate plot reveals itself.

The Accountant takes a slightly different path on the whole bred-for-war, secret agent scenario. Ben Affleck plays Christian Wolff as a man with Asperger’s Syndrome. Sensitive to sensory and finding it difficult to speak with others, his military father subjected him to harsh practices that will prepare him for both the world and any war. But Christian seems much more content and happy as an accountant, providing a perfect cover after his days of secret assassinations. Does this sound silly? Sure. What thriller isn’t when you get down to the nuts and bolts? And, boy, does this movie get ridiculous with its twists.

Christian exists as an enigma of a hitman, keeping to himself as an accountant with all his weapons neatly tucked away inside a trailer inside a storage facility. His latest target, chosen by an undisclosed female over the phone ala Hitman, is a robotics company. Christian makes his way into the company as an accountant, hired to uncover an error in tax records after a change in management. And he wastes no time in finding this error, digging through decades of records and numbers. He has a genuine love for this job the way he way he spends all night writing down all his findings and bragging with a rare smile to his junior accounting assistant Dana, played by an awkwardly curious Anna Kendrick.

But the numbers game is only half the battle as the other half is, well, the battle. Hired goons start showing up in his town, touting guns with intent to kill. Good thing Christian has been to the Jason Bourne school of taking down bad guys with his efficiency in guns and hand-to-hand combat. Although the script does setup this aspect of Christian’s character early enough, it’s still a rather silly sight to watch this movie go from the tale of a mentally impaired accountant to a full-blown action hero. Separated, these two aspects work rather well. It’s compelling to watch Christian become violently frustrated when he can’t finish any project, from a simple puzzle to an accounting job. It’s also entertaining to watch these action sequences that are fast, violent, smart and pack a lot of grit. But when smashed together, they certainly don’t make a peanut butter and jelly sandwich.

Making the plot supremely goofy is the B-plot of treasury agents played by J.K. Simmons and Cynthia Addai-Robinson. As they track down the elusive Christian, who somehow managed to avoid having his photo taken after a dozen recon photos of his dealings, ridiculous twists are revealed about how much Simmons actually knows about Christian. It doesn’t help that this twist is also revealed over a long expository flashback. All the other flashbacks seem to come in bits and pieces, but this one twist stops the movie almost as much as it halts plausibility.

There are a few strange quirks of Christian’s Asperger’s that appears rather ludicrous as well. When Christian first visits the special school for mental disorders, we see the familiar poster of facial expressions on the wall, designed for children to state their current mood that they cannot display. Cut to him all grown up as an accountant and he has this same poster in his trailer. He also recreates these faces on melons that he shoots for target practice. He even uses the exact same smiling face from the poster as the icon of his employer on his smart phone. It’s as if Christian is more of a silly Batman villain with the powers of Asperger’s. It’s strange enough that the expression chart is used as a motif for his assassinations, but it’s even more peculiar in that there’s no explanation for this choice. Does an assassin with Asperger’s really need branding?

The Accountant is a movie I wanted to root for, as it does become a rather strong picture at times. Despite Christian’s Asperger’s going slightly over-the-top at times, there are a handful of scenes that are spot on with some solid acting by Affleck. The action is very intense and expertly shot, as in one scene when Kendrick uses the contents of a bathroom to defend herself from hired goons. It’s just too bad that most of these positives falls to pieces over a pesky plot that appears plucked from a stronger Jason Bourne picture.