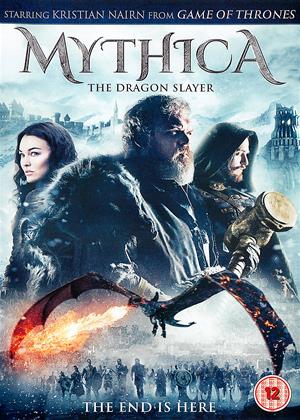 Reviews of Mythica: The Dragon Slayer

The ‘Mythica’ film series became possible thanks to a Kickstarter campaign that gave birth to five Mythica films in total, including the last one in the series dubbed Mythica: The Dragon Slayer. For a film of this magnitude (neither Hollywood production, nor Netflix original feature), it’s actually very good; it features the all-too-familiar sorcery, magic, swords and sandals, mythical creatures, fantasy, and a hero whose destiny is to save the kingdom from the evil forces who always seem to brew conflict in the background, unbeknownst to everyone else. Probably the one major remark I’m having with this film is its over-reliance on another fantasy film called ‘The Lord of the Rings’; inspiration is one, but borrowing is a whole other thing which would probably need addressing in a separate text.

And so, Mythica: The Dragon Slayer continues where the previous instalment (Mythica: The Iron Crown) left off. To this extent, the first half of the film (i.e. the “thickening of the plot”) is very well done and in all actually surpasses every expectation I had about this film beforehand. But, doing a decent plot is easier than following it with a better outcome, and sadly, Mythica: The Dragon Slayer doesn’t live up to its expectations as put forward during the first half of the film.

Thankfully, there are bright lights shining amongst that entire low-budget extravaganza; the cast is superb and does an excellent job of making their characters as believable as possible. The screenplay (albeit faltering in the second half) is decent, featuring both a snappy dialogue and extended monologues about how the whole world is at stake (somewhat typical for these types of films, but sharply executed nonetheless).

Which brings us to the villain, which is probably the weakest part of the film – and it could’ve been much, much more. Moreover, the antagonist had everything set up for him to become one of the most memorable characters ever: he had power, dominion over everyone, armies, unspeakable power, and a mesmerizing actor to breathe life into him. However, the one thing that it lacked was story. That’s right: the villain had everything going for it except for a decent motivation to do what it did in the film. But oh well, his story was shown throughout a five-part series of films, so it was ultimately stretched too thin for too long. Maybe a stand-alone feature would do him justice? Let’s hope, wait, and see.

Final words: Mythica: The Dragon Slayer is a refreshing take on the fantasy genre, but it’s very similar to the likes of ‘The Lord of the Rings’, ‘Eragon’, and the like. But then again, fantasy SHOULD feel as if it’s interconnected with other fantasies, because only then it would gather the strength to defeat the ultimate evil that is poor production values.