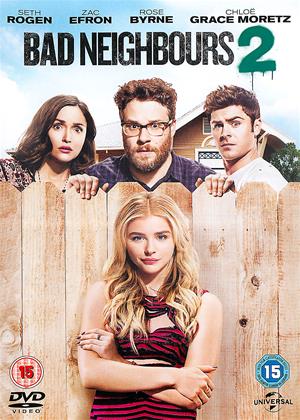 Like SO many movies these days, they get remade of get a sequel full of women - like YAWNSOME Ghostbuters, Oceans 8, Widows. Is this what Hollywood think we want?

The first movie was cartoony, lewd, rude, crude trash BUT it was twice as good as this femidrivel.

Just awful. Only watch if you're a sad teen girl maybe.

Juvenile trash from the start - Bad Neighbours 2 review by RL

With the cast being as it is I was expecting something if not life changing then at least intelligent. Sadly, unless you have the sense of humour of a 12 year old you'll find nothing from this empty, vapid, pointless waste of a disk. There are many films and TV shows that you can do rude and be funny. This isn't it, it doesn't shock as such, it isn't funny and it doesn't make you think. Aside from Rose Byrne, who's character I quite like and is about the only human one in it it's a whitewash of trash.

I don't know why I bothered! It was fun in parts but sad that US film industry churns out such sad efforts with good actors. I can only guess they are all in it for the money mainly from immature, mostly American teens. 2 stars for the good bits.

Yet another slice of Feminist propaganda that gets it totally wrong! - Bad Neighbours 2 review by CS

Whilst the first film was quite funny and centred around a group of male university students in America moving in next door to a quite suburban couple and making their life hell as a result. This sequel takes exactly the same storyline but gives us a group of completely nasty and vile feminist women destroying the ives of those around them and not giving a monkies about the consequences. A young peaceful couple with a small child are this time attempting to sell their house and need the girl students to simply behave themselves for one month until they sell, but when politely asked, the girls say tough, we will do what we want, how dare you a man tell us girls what to do, we shall destroy your lives, not give a damn and sod the consequences because it's not us who are paying the price and it's ok for us to do that because we are women! Telling your father to f* off when he asked you to show some respect to your neighbours, after you've been completely hideous to them, because you're a woman and it's all about girl power, sends out completely the wrong message. Next follows a series of unfunny moments where the two sides battle it out against each other. Then right at the end the girls are forgiven for their lie behaviour and the message is, yes because you are when, that sort of behaviour is ok, when it isn't. This film sends out totally the wrong message and as usual the film makers when dealing with the issue of feminism have got it completely wrong, it's about equality, everyone being treated equally and with respect, it's not about doing what you like, destroying peoples lives and expecting to be forgiven simply because you're a woman!

Still some gross out comedy moments. But it also has grown up quite a bit. It certainly showcases the comedic acting talents of Zac Efron and it feels more grown up than the original in many ways. Zac manages to steal the limelight in most scenes he appears. The scene where Zac uses a spit roast kebab as a replacement for baby oil as his former neighbours rub the meat joint over his body in an effort to prep himself for an exotic dance for a crowd of admiring women (and men!) is a priceless scene and there are many others.

Fans of the original shouldnt be disappointed.

Seth Rogen attempts to make his college-based humor centered around weed grow up a little more. The first Neighbors found the divide between college students who party all night and the new parents who used to be college students that partied all night. A sequel would appear to be more of the same with another frat moving in next door with another child added into the mix. To my great surprise, this follow-up offers up much more perspective and thoughtful gags than I was expecting. And that’s saying something for a movie that begins with puking during sex.

The story finds parents Mac (Seth Rogen) and Kelly (Rose Byrne) expecting their second child. With their house not big enough for two kids, they put their house up on the market to move on up. But their plans to sell hit a major snag when a sorority moves in next door. Led by the rebellious and determined Shelby (Chloe Grace Moretz), a group of partying girls decide to form their own sorority off campus to not play by sorority law. Through the help of former frat boy Teddy (Zac Efron), they use the former frat house to host parties, smoke weed and cause all manner of college hi-jinks immoral and illegal. And when Shelby’s band of ladies cannot produce rent for the month, they kick their money-raising parties into high gear at a time when Mac and Kelly need them to take it easy for just one month. The new round of pranks and battles for the young and old are off once again.

The strongest aspect of Neighbors 2 - and even I was shocked by this - is the story. I was impressed with how the script managed to touch on a few more issues and expand on characters a little more. Shelby isn’t just some nasty antagonist meant to be a bother for Mac and Kelly. She has a norm she wants to break, a message she wants to be clear and a sense of freedom she feels is lacking from what should be the best time of your life. There’s also plenty of points made about sexism from more than few perspectives, both comedic and telling. I was not expecting something so intelligent from a movie with bong hits and dildos.

In between this divide is the character of Teddy, desperately trying to find his place in the world after college ends. While all his friends have gone off to pursue real careers and settle down, Teddy remains left behind as the hunk who is suited for little more than retail. He truly feels the sting of realizing how old you are when college kids call you a geezer and everyone you work with is six years younger. This is something real that most college kids don’t grasp until it’s too late. If frat boys take anything meaningful from this comedy, let it be this.

And I felt just a little bit more for Mac and Kelly as parents struggling to make the right choices they have no idea about making. They mess up the specifics of acquiring a home and have their parenting called into question. Granted, they take it to some odd extremes as when Mac admits to leaving his child home alone when he went out to Taco Bell for the munchies. But most parents can recognize the sentiment for those parents struggling with the fear and paranoia of doing the right thing.

Neighbors 2 hits on so many telling characteristics that it’s a shame it stumbles along the way. Every actor is solid except for Chloe Grace Moretz who tries too hard to embody the bad girl capable of innocence. All the jokes are more funny in theory and not so much in their execution. There’s a strong message and commentary behind this story, but is only held back by how long the creatives want to hold on a bong hit or extend a dirty word. I’m frustrated in how I wasn’t able to enjoy this movie more, but I’m at least relieved to discover that the college kids lured into this picture will take a little something more away from it than a fart joke here and some slapstick there.