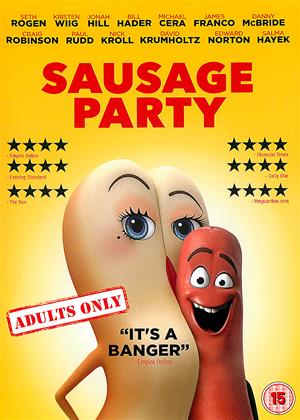 Brilliant, as embarrassingly laugh out loud as possible! - Sausage Party review by CS

I'd heard a lot of things about this film, from good to bad, but having now watched it myself I thought it made a refreshing change form all the re-makes, re-hashes and stolen ideas which seem to abound at the moment! Politically Incorrect, Raunchy, Sexual and Extremely Offensive, it's just the thing that every person with a grudge, bias or prejudice needs to watch! Yes it will probably offend a lot of people, particularly those of a religious bent, but that's the whole point! The film does not set out to intentionally offend, what it sets out to do is educate and show just how silly prejudices are, so if you're offended, then that's probably because you need to open your mind and be a bit more acceptable of others! For me this was a great and highly funny film to watch, with some great moments and lots of sexual innuendo all the way through! Not a family film, nor one for the faint of heart, but a hugely entertaining and funny film none the less! It really did make me laugh out loud!

This is labelled as for CHILDREN/FAMLIES on CinemaParadiso - well,, mummy's gonna have conniptions once this stars and the kiddiwinks ask what the C word means! It's very much an adult movie.

I love the way this movie flies in the face of political correctness in a way the pc BBC or much of the movie industry simply would not do. It's all the better for it.

This film mocks religion and the gullible who follow faiths. It's full of crude and sexual jokes, some so disgusting they almost make me blush (and I've seen everything in my time!)

I loved the racial and religious stereotypes of Arabs, Jews, Mexicans, Indians etc - do that in the UK and the plods would probably arrest you!

I'd advise maybe using subtitles so you hear the words of every line of the songs.

Funny to hear Wham's Wake Me Up Before You Go-Go and Spandau Ballet's Gold on here, as well as a cameo from Meatloaf!

A very funny and crude film, and a refreshing change from all the tedious 'politically correct' movies out there.

Sorry, didn't like it! - Sausage Party review by CP

I know this film is popular and has done well, but I just didn't find it funny. Felt the writers thought vulgarity by itself is funny, it's not. I've no problem with films that are make non-PC jokes, are vulgar and sexually explicit, but if it's a comedy, you need to be funny. Often I'll laugh till I'm crying at juvenile vulgar humour, but this one didn't hit the funny bone for me.

Well if I could give this film zero stars then I would, what a load of tripe!!! I don't mind bad language, I don't even mind things that other people might find offensive, however when you have a film that literally from beginning to end is swearing and lewd with absolutely no point to it then it just becomes boring, insulting and completely pointless. One scene that is particularly bad taste is the rape scene which if in a normal film would be banned, but in the context of an animation that is meant to be funny to the viewer is just downright disgraceful, there is no way I am going to watch something like that and laugh!!! Please do yourself a favour and avoid this film!!

The grand appeal of Sausage Party is the subversion of mainstream animation. It attempts to shatter the notion that computer animation is a medium primarily reserved for children and families by offering up a savage satire of anthropomorphism. Embracing an R-rating, this is a CGI adventure that is loaded with adult language, drug use, excessive violence/gore and explicit acts of sex. For the audience that has never seen such vulgarity in an animated movie, Sausage Party will be a delicious slice of counter-programming where the adults finally get to enjoy an animated movie on their level of humor. For anyone else familiar with the works of Ralph Bakshi or Heavy Metal, this will come off as just another one of Seth Rogen’s raunchy joints with an animation glaze.

The picture is a farce on the concept of talking food, primarily set in a grocery store where products with food desire to be taken home. They see humans as gods and the exit of the store as the great beyond, what they perceive to be eternal paradise. They have no idea that their entire purpose in life is to be consumed as they’ve apparently never seen any human in the store eat something. It’s a rather strange store in how they have the oddest placement, storing packages of hot dogs next to packages of buns on the same shelf.

They need to be close, however, as the hot dog of Frank (Seth Rogen) can form a bond with the female bun Brenda (Kristen Wiig). They can’t wait to be chosen together by the humans so that Frank can be inside Brenda, an experience that’s apparently a sexual act. But when they are tipped out of a shopping cart by a crazed jar of honey mustard (Danny McBride) that knows the truth about the great beyond, Frank and Brenda set out on an adventure through the grocery store to make it back home. Meanwhile, the stubby runt of a hot dog Barry (Michael Cera) is taken to the great beyond and escapes the clutches of the humans after witnessing a horrific sight of food preparation.

For the first act, Sausage Party has a bit of clever crass and vicious shock. When Frank and Brenda tumble out of the cart, more food spills out creating a gruesome Saving Private Ryan parody of dying products. When Barry watches his friends being consumed in the great beyond, it’s a brutal sight of characters pleading for their lives as they are chopped, sliced, shredded and chomped. Throughout this horror show, there is a questioning of their beliefs and how religion has clouded their minds - a surprising allegory for a movie such as this.

But as the movie goes on, it begins to favor more easy humor and lose sight of its message. When the script isn’t relying on the shock of watching animated characters curse or be brutally murdered, it’s mostly food puns. And I mean A LOT of food puns. A handful are offensively clever as with the jars of sauerkraut that want to exterminate “the juice”, but most of them are lame as when Frank speaks to corn with the phrase “lend me your ears.” These are gags so juvenile in their conception that they feel more in place with lesser Saturday morning cartoons than an adult animated comedy.

The message of anti-religion has a few brilliant moments of intelligent perspective and irreverent commentary, but mostly becomes childishly blunt as the movie loses sight of this theme by the third act. Most audiences will praise the picture for even having a message at all, even if it’s handled as awkwardly as Seth Rogen and Evan Goldberg handle all their scripts. And for as darkly-comedic as it is to watch cute food products suffer painful death, the shock and awe wears off by the third act that seems to rely entirely on the sight of food being killed and humans being murdered by them.

For as politically incorrect, rebellious and offensive as Sausage Party wants to be, it doesn’t quite reach its full potential of being the provocative adult animated comedy it aims to be. It’s sure to garner a few good laughs from its premise that lets the older audience have fun with computer animation. But in comparison to the R-rated animated pictures of Fritz the Cat, Heavy Traffic and Coonskin, films that had more to say in their raunch and shock, Sausage Party tastes slightly undercooked.