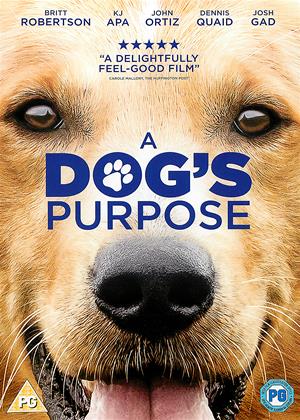 Reviews (8) of A Dog's Purpose

Forgive my title joke, this film is directed by Lasse Hallstrom. The film definitely belongs to the dog stars though, after time it will be the canines that stick in your mind and not the homo sapiens.

I feel this film will get some bad reviews but I make my case for a good one.

I'm a sucker for dogs so it worked for me. On a deeper level, I really believe that dogs can sense when your down and when you're happy etc so that aspect of the film also has credibility.

The film charts the lives and deaths of the same dog that reincarnates into different canine species, with a new family in each life.

I thought the first and last dog stories were great, which is obvious when you see the film, my point being that number 2 and 3 dog were not so interesting stories, although I still enjoyed them too I hasten to add.

I think dog lovers of all ages will dig this.

A nice and emotional film.

Sweet movie, an excellent sorbet in between heavy fare. Delightful story without being cloying. All dog lovers will want to see this one. Any child who watches will want a dog to share her/his life. Good casting, for the actors who play the child, teenager and grown man played by Dennis Quaid have the same lovely smile. Story is tod from dog's point of view - dog's thought as well as dog eye level. A happily ever after story. Another reason to love watching movies on dvd, the special features were interesting. You watch snippets of the dogs being trained and the writer and his wife talking about how the story was developed. The whole story came to him as they were on a road trip and he made up the story to chher her for her beloved dog had died. Good movie for dog loving adults and for children. Bailey the reincarnated dog learns that his purpose in life is to bring joy.

Basically, a dog gets reincarnated a few times, and some people have a love story going on. End of.

The thing is, if you are not spiritually-minded or religious, then all this stuff about reincarnation will make you groan as I groaned. It's just TWADDLE and HOKUM. I laughed at the way the dog was reincarnated from the 1950s to the 21st century ONLY in the US of A. How does that work then?

There's been a glut of what I call 'pity party' animal stories lately, where an animal helps people OR a reincarnated version of a pet comes back to help its previous family with various issues - health, family, homelessness, worries etc. It's almost a new genre actually. Most are WAY too sentimental for my sceptical tastes though! You pays your money...

What I really didn't like was the amateurish way that this dog's first person narrative was done - how can a dog know the names of his owners? Or that a vet is called a vet? Or much else besides. A dog would not know that or think like that - so I thought that was quite badly done, though probably best to blame the book (predictably a best seller because it appeals to all the very sentimental mostly female readers who map up this sort of drivel). A FAR better way is to see thins via smells - which this dog does sometimes.

This is better done in other animal books - for example, A Cat Called Dog, where the cats call the vets "the place of smell and pain". Now THAT is really getting into an animal's psyche and under its skin! In that book people are referred to as 'two-legs' NOT by their given names, again seeing the world the way a cat or dog would see it.

If you like soppy love stories, or see yourself as spiritual and believe in reincarnation, then you'll have a ball with this movie (I'd say 99% of its fans are female too).

For me it didn't merit more than 2 stars but it passed the time.

Quite clever concept, with some clever photography etc. Would not class as a kids film though.......at least not young ones............

One for the children, however the adults will enjoy seeing the children smile and laugh. I didn't think it was bad. Predictable, but not bad.

This movie certainly moves you. It's a family film though kids need to understand about death!

It is a great metaphor that outlines what can happen with life!

The dogs featured have been exceptionally trained and were fantastic!

Lasse Hallstrom's best film yet - A Dog's Purpose review by AS

This film is a delightful combination of warm-hearted entertainment along with a profound presentation about how re-incarnation works. Because we see it happening to a dog soul, it's easier to take it in than if it was presented as happening to a human soul.

The film accurately presents the remarkable psychic capabilities of dogs, who tune in to their owners and can read their minds without having to learn the English language.

Not recommended for the cynically minded!

I read the professional review and they haven't even bothered to get the dogs name right. So they really paid attention. The dog is Baillie, it is said over a hundred times so why did the reviewer call him Tobey? Where did that come from?

This film is ok? If you like dogs then you'll like it but the narration is a bit irritating. I'm sure it could have been done better.

Not bad though, I've seen a lot worse.

What can you do with dogs in movies? In the many years I’ve been reviewing movies, I’ve seen it all: Dogs that can talk, dogs that do karate, dogs that pilot robots, dogs playing basketball, dogs playing football (both kinds) and dogs in space. They’ve all smeared in my memory as a blur of tipped tables, chewed up shoes and so many barks, yelps, whines and groans. The only dog movie I’ve seen in past years that had any amount of originality or character was White God, in which a dog goes on a journey home that ends with him as a vicious beast leading other wronged dogs on a murderous rampage. Ah, what a refreshing distraction from this tired sub-genre of film that relies almost exclusively on dogs looking cute.

I went into A Dog’s Purpose fully expecting the answer to be eating food, being pet and looking adorable, but was both surprised and dismayed by the film’s ambition. It begins with the puppy Tobey being born and his first internal thought, voiced by Josh Gad, is that of comprehending his reason for existing. How mature for such a young pup to have such deep thoughts. Maybe there will be more to this dogs than meets the eye. Maybe he’ll have something to say with his interesting perspective on life, distant from our human conceptions of life. Well, he might have been capable of such thoughts if he wasn’t too busy eating a bunch of hot dogs off the ground and then farting loudly in the car.

But I can’t say I blame the dog. Life is more enjoyable with his loving boy Ethan to feed and play with him. His life probably seems simpler and not as worth the contemplation with such pleasures. To us humans, however, Tobey is just another dog doing typical dog things in a typical dog movie. He digs up the yard, chews some shoes, relishes being pet, tips over tables during dinner and spends the night in the garage for being a bad dog.

But with the added narration/commentary by Josh Gad, there’s an inconsistent tone to the dog’s behavior. From the opening narration, we know this dog is aware of death, but somehow can’t figure out a cat is dead. What could have been a great moment for contemplating his own mortality is turned into a silly moment where that rascally Tobey digs up a cat corpse and brings it in the house. This shifting of tones for a dog movie makes some of the more intentionally comical moments more perplexing and dark than they should be. The scene where Tobey makes a mess of dad’s big dinner with his boss is typical sitcom hi-jinks, but take a darker turn as dad doesn’t get that promotion and turns into a violent alcoholic. But don’t question that too much - look at the cute doggie!

Of course, Tobey can’t be there for Ethan for the rest of his life and must die in a somber scene as he is put to sleep, his last vision that of Ethan. But Tobey doesn’t pass away into the next afterlife, I assume, as he still hasn’t discovered his true purpose. His soul is then reincarnated into a host of different dogs as he lives through the lives of being a cop dog, another family dog and an abandoned dog. This eventually leads to the bookend plot of Tobey finally finding an aged Ethan (Dennis Quaid) and finally finding his true purpose: To hook Ethan up with his high school sweetheart. Yeah, it only took him four lifetimes to figure that out.

As with most dog movies, A Dog’s Purpose exists in a weird world where dogs can do anything. In his second incarnation, Tobey can easily jump into raging waters and pull a girl to safety, without much concern from his police partner that runs after a criminal instead of saving a drowning child. In his third incarnation, Tobey is apparently allowed indoors at a fancy restaurant, only so that he can chase another dog and topple over the tables. He can also eat loads of human food to comfort his female owner, long past the point that any normal dog would topple over dead from eating pizza and ice cream.

There are twinges of scenes where I could sense the movie trying to be about something more deeper, philosophical and emotional. It’s faint, however, as the movie often loses sight of these thoughts so that Josh Gad can perform his Homeward Bound audition of commenting over a dog’s actions. And when the dog apparently has unlimited tries at finding his purpose in life, it really brings into question how many times you can watch a dog die before you stop caring. What’s the point in feeling sorry for Tobey when he’ll come back in another form with most of his old memories? Wait, are they the same memories? Is there a limit to Tobey’s reincarnation? Why am I asking these questions about a silly dog movie? Can’t I just enjoy the cuteness of doggies doing doggie things and weep when they perish? I would, if only the movie didn’t have such broad ambitions, only to trivialize them in the end.