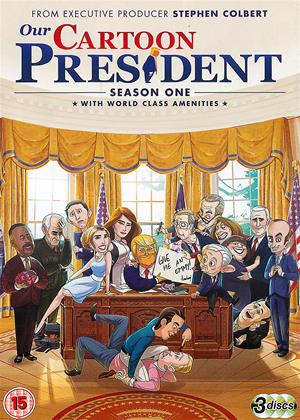 Reviews of Our Cartoon President: Series 1

With every inept US President comes parody. Sometimes that parody is long-lasting since that celebrity won’t be leaving the public eye for the next 4-8 years. Thus we Americans end up with a quickly assembled comedy series that progresses for about as long as the figure can be milked for jokes. We received the same types of programs from the Bush era, with the likes of the sitcom That’s My Bush and the cartoon satire Lil’ Bush. It’s why a cartoon like Our Cartoon President shouldn’t be a surprising series of this era. It’s not good, but we should at least know where it’s coming from.

The show basically plays like an extended Saturday Night Live sketch, latching onto Trump’s latest political situation and crafting a kooky script around it, not unlike That’s My Bush. The biggest difference is that That’s My Bush was additionally trying to satirize sitcoms at the same time. The entire bit of Our Cartoon President is the easy angle of portraying Donald Trump as a dunce surrounding himself with idiots. To the credit writing, this isn’t too hard to do with the current administration, ripping Trump’s talking points almost verbatim and slathering some quick cartoon silliness over all of it.

But the appeal from this angle is making mockery of a President already a joke himself has this surreal edge when presented in the form of a continuous series. The approach is similar to that of a political cartoon you read in the paper. One illustration that makes a political point through exaggeration and you’ve had your fill. When in cartoon form, the bit still has to be short and to the point. Consider that this entire show spun off of a four-minute skit from Stephen Colbert’s late-night talk show. That’s how it should’ve remained. Now armed with a full-blown series, we have to spend an extended period of time with satirized political figures being parodied for their idiocy of the moment. That kinda comedy usually doesn’t have the best shelf life, especially when the sitcomish situations weaved around real-world politics really lose the bite.

The more reactionary crowd might state that this program is unfairly attacking Trump and is thus a political smear series of sorts. In truth, the presentation of Trump as more of a wacky dictator accomplish more of the opposite. The series has gone on for three seasons, including an election special in 2018. We spend a lot of time with Trump and play him up more like a crazy cartoon character than someone of demonstrable political power and rhetoric. This presentation doesn’t so much demonize Trump as it does humanize, making him funnier than damaging. It’s very much akin to the misconception that Saturday Night Live is aggressively critical of Trump, an argument which falls apart considering the mockery is more of his mind and that Trump himself was the host of Saturday Night Live DURING his campaign. The longer the show lingers, the further Trump seems more like a need for comedy. After all, if he’s out of office, the show is over.

Nothing about Our Cartoon President is going to stand the test of time being a mere snapshot of the era. But here’s the thing; our news cycle is already a snapshot of the era. And Our Cartoon President adds nothing to that commentary, doomed to be lost to time with the easy political cartoon commentary of the day. Anyone who keeps with this presidency is going to get nothing from a show that makes such obvious observations as Mitch McConnell looking like a tortoise. Spitting Image this program is not.