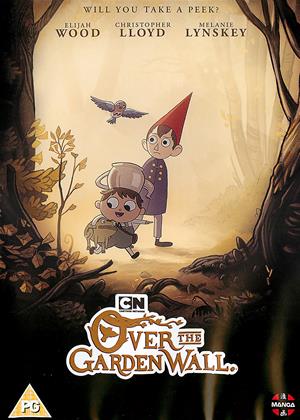 Reviews of Over the Garden Wall

Over the Garden Wall review by Mark McPherson - Cinema Paradiso

Over the Garden Wall is to Adventure Time what Samurai Jack was to Dexter’s Laboratory. It’s another whimsical project from the people behind Adventure Time but with a more affectionate touch. There’s a bolder choice in favoring a tone more emotional and an atmosphere a tad darker, likening to the more post-apocalyptic allure of Adventure Time’s later seasons. It makes sense that Cartoon Network kept this miniseries contained to evenings, favoring the saga’s immaculate beauty for a warm fall amid strange happenings.

The story concerns two brothers, Wirt and Greg (Elijah Wood and Collin Dean), lost in the woods. Labeled as the Unknown, the forrest quickly transforms into a supernatural world of the most intriguing characters. In order to escape, they must traverse the oddest of locations as they run across such quirky entities as the aloof Woodsman (Christopher Lloyd) and the peculiar Beatrice (Melanie Lynskey). They have their own concerns of curses but may just be able to help the boys on the venture out of the woods.

The brothers make a brilliant duo for this fantastical adventure, Wirt is the tall and tense older brother who struggles to make the tough choices. He would much prefer to play music or write poetry and is relatively shy which makes his journey all the tougher when keeping track of his younger brother. Greg provides a great contrast as the more innocent and carefree of the pair, finding more wonder than worry within the world. As an example, he finds a frog on his adventure and spends most of the series trying to figure out the perfect name for him.

The adventures of Wirt and Greg have an old-fashioned charm that resembles a simply sweet storybook with winding stories of wholesome warmth and poignant drama. In one of the most adorable scenes, Greg entertains a room full of colorful characters with his improv song about food delivered in a childlike sweetness. There are still darker aspects as well when the brothers learn they are being pursued by the beast known simply as the Beast (Samuel Ramey). The Beast, however, is a clever villain in that he thrives on extracting the hope of his victims. And when the true twist of the series is revealed, it’s a surprise that speaks volumes about brotherly love and the gap between life and death.

Unlike Adventure Time, Over the Garden Wall deals with themes a wee bit weighty for the younger crowd, but is perfectly suited for the kids who grew up right alongside the show and desire something a bit more mature. It is for this reason the show is better suited for family than kid viewing, especially with the unique twist that will no doubt resonate a bit more with the older crowd. Dark and sweet as the best piece of dark chocolate, making a kid feel a little more adult for something so bitter yet so sugary.