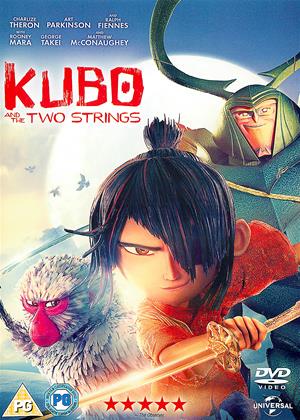 Rent other films like Kubo and the Two Strings

Reviews (6) of Kubo and the Two Strings

This film is breathtakingly beautiful. That is the overwhelming sensation I have when I recall it. Often such praise is used to cover failing elsewhere in a film, but there were no such failings here - the story is strong, with great characters and excellent voice work from an A-list cast.

It's very difficult for me to comprehend that this is a Hollywood movie - it just *feels* so Japanese - like something that should have come out of Studio Ghibli. Which just goes to show how trustworthy our preconceptions are.

Slightly confusing anime (Q: who *was* the hero's mother? Human? or monkey?)

Overly praised to my mind as it is a standard story - good v evil with helpers on both sides and psychological pseudo-ism in the whole film.

I have no idea why people are praising this animation to the skies. YES the animation is top notch BUT the story and execution are not, and are often confusing - added to which, the frankly tedious 'floating' martial arts battle scenes which I find totally tiresome.

It's basic good versus evil fare BUT if you want to watch a really superior version of that then watch Sleeping Beauty, not this.

It's all set in Japan so tick the diversity boxes though with its giant set pieces is obviously meant to appeal to the Chinese market too, as that is what they love (and what has totally ruined James Bond movies!)

It's so-so but I found it ultimately boring and overlong - and I cannot see many kids having the patience with a lot of it, or understanding the confusing spirit-world plot.

2 stars for the animation

The animation, as its stop frame using models, is extraordinary, and the whole design really wonderful. However, I struggled with the story. I might love magic, and dark is fine, but either this is cultural story I cannot reference, and it's a bit complex and odd if you cannot, or it's just an odd story without a clear sense of root for me to give it real depth, just a weird made up story. I might have gone along with it but the modern bright and cheerful in your face American accents of the characters, were at odds with my personal experience of Japan and certainly traditional Japan. So with matching resonance of story seemed like any old mediocre Disney film but difficult to follow not anything that felt like it came from mythic Japen where its set. All that amazing animation work..... And let down by the writing that inspired the film in the first place. Perhaps like Fantastical Beasts if you let the technical wonder dominate and reflect that in the creative team you don't bring in sufficient rigor to deeper film creativity that gives a more rounded satisfying film. Worth a watch but may not watch again.

Wonderful - Kubo and the Two Strings review by RL

Odd when you know how good an animation is, with the family silent for the duration - their normal attention span is 30 minutes.

Laika nails another - beautiful and with a profound message.

Great movie - Kubo and the Two Strings review by TP

We all loved this movie, very beautifully done. Suitable for all ages but a little scary for my seven year old at times.

The stop-motion animated movies of Laika have distinguished themselves greatly from their competition. They choose stories that are a little dark, a little gross and very original. There isn’t quite anything like Paranorman or The Boxtrolls. They also put a tremendous amount of craft into their work, animating some of the most state-of-the-art and beautiful stop-motion ever filmed. But their films have never really hit their full potential of delivering on a meaningfully emotional tale to balance with the stunning imagery. That was until Kubo and the Two Strings.

Told as a Japanese folktale, the plucky and one-eyed Kubo lives in a cave with his mother that is crippled with memory loss. By day, he ventures down to the nearby village to use his magical powers to earn some money. With a few plucks on his guitar, he has the magical ability to bring his origami creations to life. With this ability, he entertains a crowd for nearly the entire day with stories of samurai and demons.

But he must return to the cave by nightfall before an evil witch find him and finish the job they started. Kubo’s desire to learn more about his dad makes him late to arrive at home and he is attacked by a wicked, magical woman that wields deadly weapons and has the ability to duplicate herself. Saving her son, Kubo’s mother uses the last of her own magical ability to hold of the witch, instructing her son to find a magical armor ensemble that can stop such evil.

Aiding Kubo in his treasure hunting journey is a talking monkey (Charlize Theron) and beetle (Matthew McConaughey). Learning from the wise monkey and the brave beetle, that never overdo their comedic chemistry, Kubo develops his powers further as he ventures into dangerous lands of legendary terror. A towering skeleton guards a collection of swords lodged in its skull. Large eyes hypnotize Kubo underwater where tentacles seek to drown and eat him. And the impending threat of the evil magical sister carries real danger where each battle doesn’t end so triumphantly.

What’s most unique about this adventure is that it doesn’t pull punches when it comes to the darker aspects. I liken its tone to that of The Secret of NIMH or Watership Down as an animated film that can be seen by kids, but doesn’t talk down to them with the themes and content. There’s a faith in the younger crowd that they can handle heavy subjects of evil spirits, frightening monsters and death. Kubo gives fair warning in the opening credits, “If you must blink, do it now.” Similar to NIMH and Watership Down, it is sure to go down as a bit of a traumatic picture for kids to carry with them into adulthood, but they’ll look back on fondly for being willing to take the risk.

The animation by Laika is some of their best work to date. The 3D-printed models are more expressive than their previous movies to an almost absurd degree in their design. Just look at the face of the elderly woman that befriends Kubo with her wrinkled skin that stretches with every smile and wink. Examine the level of detail in the white monkey’s flowing fur during a snowstorm. There is so much freedom in this medium that the filmmakers are able to control everything from the tiniest movement of paper origami to the lanterns that transform into birds.

The biggest fault of Kubo would most likely be its fast-and-loose rules of magical origami, evil spirits and the power of ghosts. But there’s thankfully enough charisma, beauty and technical charm to warrant such a tale that above all wants to encourage the power of storytelling. And it can accomplish this theme while still weaving an action-packed plot of sword fights against supernatural monsters. It’s that rare breed of an animated epic that can be seen as an emotionally moving picture for adults and a badass revenge tale for kids.