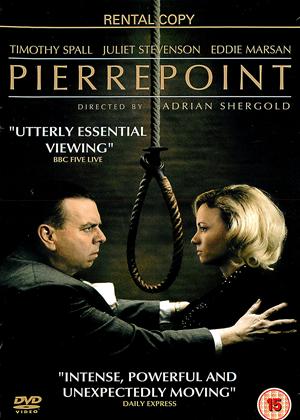 Synopsis:
Pierrepoint is the gripping and dramatic true-life story of Albert Pierrepoint, Britain's most notorious hangman. Following in the footsteps of his father and uncle before him, Albert joins the 'family business' in 1934. Living a secret life as a master hangman, as well as a humble grocery deliveryman and loyal husband, Pierrepoint's reputation as the most highly regarded executioner in the land results in him executing some of Britain's most infamous murderers including Derek Bentley and Ruth Ellis, and also the Nazi war criminals convicted at the Nuremberg Trials. But the media coverage from these shatters Pierrepoint's closely guarded anonymity turning him into a minor celebrity.
As his two lives collide, and public opinion turns against capital punishment, Pierrepoint troubled by his notoriety is ready to give it all up, but fate has other plans in store for him.
Actors:
Timothy Spall, Juliet Stevenson, Eddie Marsan, Simon Armstrong, Ann Bell, Nicholas Blane, Clive Brunt, Cavan Clerkin, James Corden, Marie Critchley, Neil Fitzmaurice, Keiran Flynn, Clive Francis, Christopher Fulford, Frances Shergold, Lizzie Hopley, Peter Jonfield, Bernard Kay, Dominic Kemp, Claire Keelan
Directors:
Adrian Shergold
Writers:
Bob Mills, Jeff Pope
Others:
Christine Langan
Studio:
Lionsgate Films
Genres:
British Films, Drama
Countries:
UK

Superbly acted look at the life of Albert Pierrepoint, which tales place between the 1930's and (I think) late 50's. A seemingly morbid tale, it is nonetheless fascinating to see how Pierrpoint goes from 'national hero' to 'immoral butcher' as society's thinking about capital punishment changes. Timothy Spall is absolutely brilliant and the end of the film is shockingly tragic.

Superb performance by Timothy Spall who shows us the humane side of an executioner and the eventual trauma which his profession causes to those who carry it out and their families. The film evokes the atmosphere of the 1930s to 1950s when capital punishment was an accepted part of everyday life but by the mid 1950s we see the unease caused by executions of innocent men like Evans and Bentley and of women - Ruth Ellis in particular. A strong cast all round. Based on fact, only one incident appears improbable but may be true for all I know. Recommended for those who enjoy a thought provoking film on a serious topic, well acted.

worth watching - Pierrepoint review by PV

Interesting film starring the always-excellent Timothy Spall. Perhaps if those execustion-bunglers in Iraq had watched this they'd know how to execute people efficiently and with dignity.

Can one 'enjoy' a film about a hangman? - Pierrepoint review by RP

A film about a hangman? Now that sounds just right for a happy night at home... As you might expect, it isn't exactly cheerful but with excellent actors including Timothy Spall (as Albert Pierrepoint), Juliet Stephenson (his wife) and Eddie Marsan (his friend) the story is well told. The film was originally made by Granada and screened on ITV before its cinema release, so it is essentially a low budget film – but very well done. The story goes like this: starting in 1932 and resigning in 1956, Albert Pierrepoint followed his father and uncle into the family 'trade': a hangman. This was just a part-time job - he was a delivery man for a grocer and later a publican as his main occupation. He started as an 'assistant' hangman then as 'chief' from 1941 onwards. He was the executioner for the Nazi war criminals following the Belsen trial, and carried out some 200 executions in Germany which brought his grim total up to more than 450 - although the credits for the film claim 608. The film shows how his professional approach to his duties and his detached approach began to break down as the number of executions mounted and became more personal when he executed someone he knew (his friend 'Tish', played by the always excellent Eddie Marsan), and he eventually became opposed to capital punishment. Clearly the film is a drama but it is based on real events (the credits say 'inspired by'); despite the subject matter I found the film moving and although there no grisly scenes on-screen I also found it quite shocking. It is quite slow moving and this adds to the seriousness of the subject. I enjoyed it - can one 'enjoy' a film about a hangman? But you know what I mean. 4/5 stars Highly recommended.

Enjoyed this film despite the dark subject matter, Timothy Spall is excellent as the countries no1 executioner who goes from hero to national scapegoat as the social climate changes in regards to the death penalty. Great supporting cast as well in this film, grim but compelling viewing.

This is a great film and superbly acted by Timothy Small. Pierrepoint took pride in his work right until the end never showing his feelings towards those who faced the hangman. The film showed Pierrepoint was slick in his approach and quick, and had a humane approach to his work.