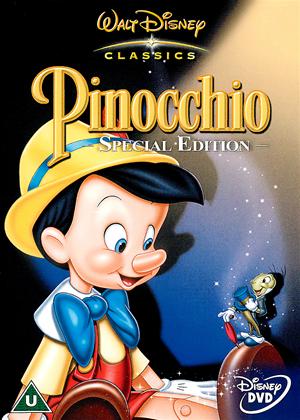 Wish Upon A Star - Pinocchio review by CP Customer

After the wonderful job Disney did with Sleeping Beauty, they wheel out Pinocchio for its 70th anniversary. This is the definitive package. A family classic it has been restored to immaculate effect for blu ray. If you haven't seen Pinocchio (I'm sure most of us have) then this is your opportunity to do so. At 84 minutes it contains all the original Disney magic and never outstays it's welcome. Given its age you'd think additional content would be hard to come by but Disney have emptied the archives. Never-seen-before deleted scenes, an alternative ending and a thoroughly informative commentary are just a few of the extras here. Watching and listening to the material makes you appreciate the work that went into such a film 70 years go and it is a timeless classic.

I think the thing I enjoy most about Pinocchio is the lessons it teaches. Not only are metaphors like your nose growing when you lie, or becoming a donkey if you're naughty, still used with great effect today, but Pinocchio genuinely has to learn through these metaphors. He's by no means an unlikable character at the beginning, but he has real flaws, and has to become a better person through time in order to become a real boy. He even goes as far as risking his life to save Geppetto. That instantly makes him far more fascinating than Snow White!

The animation is a big improvement too! In Snow White, I felt as if they tried to make the human characters look a little too lifelike, and they kinda jarred with the more obviously animated ones like the dwarfs. But in Pinocchio, they all look like they're on par with each other. They're real enough to look human but toony enough to fit with the painted backgrounds and anthropomorphic animals. Despite being over 70 years well, it's aesthetic has aged surprisingly well.

If I did have to complain, I would say there's rather too much filler in this one. I dunno, there seem to be a lot of scenes where nothing much really happens or if it does, it doesn't really progress the story in any way. I remember one scene in particular where Pinocchio, the fox and the cat are singing Hi-Diddle-Dee-Dee as they walk through the streets and I was thinking to myself "why are we stuck watching this? Shouldn't we move to the next scene by now?"

When it comes to the Classic Disney films, I often see this movie in the top 5 somewhere. And honestly, it's not hard to see why. It's probably about the most timeless of classics from the Disney vault, and all their future films would have a lot to live up to after this one :-)