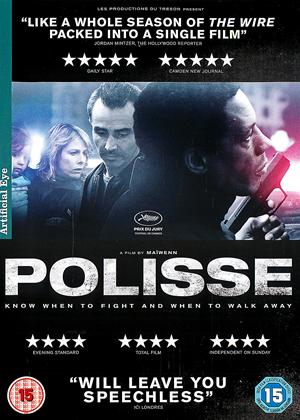 Presented in documentary style, this film takes you on a fascinating journey with the French child protection team. Often disturbing and sometimes shocking it moves at a pace and will leave you wanting to believe it is not as real as it seems to be. Weaved into the film are windows into the lives of the CPS team capturing the strain generated by their challenging career choice.

The first scenario involved a female police officer interviewing a little girl about the nature of the abuse her father had subjected her to. The realisation that the parents of the child actor had allowed her to take part, describing in ever increasing details where her abuser had touched her was very, very shocking. What were the parents motives? The child actor herself, although very convincing, presumably had no say in the matter. She didn't drive herself to the studio, agree terms or sign a contract did she? It was child exploitation pure and simple. I did not watch any more and suggest that no else does either.

Whoever did the script or story must have wanted to play out their own sexual fantasies. The first 20 minutes was all sex talk , sex acts and bad language. The story was disjointed , if there actually was one , it just seemed like an excuse for the writer/ produces get off on their own sexual trip. Bad taste and utter crap.

Actress-director-writer Maiwenn inserts herself in her film ‘Polisse’ as Melissa, a photographer commissioned by the Interior Ministry to document the activities of its Parisian Child Protection Unit. Melissa becomes part of the milieu of officers of different personalities, temperaments, and backgrounds. She even finds herself an unexpected love interest in police officer Fred (rapper Joeystarr). But ‘Polisse’ is not about romance, comedy, and buddy cops – it’s really about the violence and abuse on Paris’ children and the emotions it incites among its case workers.

The grit in ‘Polisse’ is well-played; you see the harshness of the Paris neighborhoods and even the ruthlessness of sexual abuse between predator and prey. It’s disconcerting to have characters that are nonchalant about their wrongdoings: a father who commits incest with his young daughter and proud of it, an imam who has no qualms marrying off his underage daughter, and other young boys who both treat others like crap while they too are treated this way. ‘Polisse’ doesn’t sugarcoat criminality and immorality; it is prevalent in any modern society even supposedly posh and cultured Paris.

All the police officers in ‘Polisse’ inhabit their characters with ease, giving warmth, heroism, and irony to their performances. You can see that they love what they do but they hate that it’s happening. They understand that it’s reality but it doesn’t mean that they don’t wish it to stop. How the film is written whether with a working script or encouraging improvisation doesn’t matter. ‘Polisse’ essentially tells episodic and compelling stories that are truly worth viewing.

With such a heavy theme, ‘Polisse’ doesn’t veer away from the reality that such monstrosity could also be a source of comedy. Even the police officers can’t believe the lengths people would do for stuff (there’s a mobile phone situation.) That’s life, whether you blurt out a guffaw or nervous laughter, it’s inevitable. Underneath it all, writer-director-star Maiwenn doesn’t let go of a truth that’s universally known: Girls are easily targeted for molestation, violence, and abuse. No amount of child protecting by police could put a stop to it unless attitudes change all around.