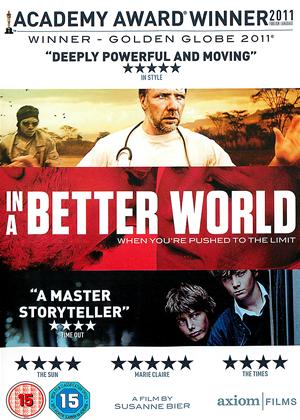 Reviews (3) of In a Better World

The stars and subject of main interest for me was not the comparison of African conflict versus Danish middle class troubles, but the effect of disturbed families on 2 boys. These child actors are superb. Their troubles are completely believable and intensely dramatic. Few will be watching who don't remember some part of adolescent development that is not reflected in this sad and gripping story. I found some of the adult scenes far fetched and ludicrous (the garage forecourt cheek slapping scene for example) and some were horrific but irrelevant (e.g. demands of necrophilia). The film would have been improved by removing all the desert surgery scenes which were I think were less well acted, to the point of being a bit cringey, and expanding the child bullying scenes which really hurt.

Brilliant movie about bullying - In a Better World review by ME

A very moving film about grief and loss and how it cannot be avoided . It is also one of the best and most subtle studies of bullying and the insidious nature of peer pressure on adolescents I have seen on film. It's also a moving study of the helplessness of parents when their kids are being bullied or when they themselves are being bullied by their children. Denmark has a veneer of being a perfect society so it is timely to see it is no different from anywhere else .

Okay-ish - In a Better World review by BE

The story is triggered by two school boys being bullied by their peers and two adults doing the same thing. To fight or to turn the other cheek? Both scenarios have a point. Unfortunately, the turning of the cheek by one of the adults has fearsome repercussions on the two young friends. One of these is unable to deal with school bullies and is being affected by the breakdown of his parents' union. The other is suffering grief from the demise of his mother. Unfortunately, this has manifested itself into his becoming unforgiving and presenting violent behaviour due to his repressed emotions. Watchable but felt that the desert scenes around one of the adults (a doctor) tending wounded African refugees were unnecessary and made the film too long. The acting by the two school friends was faultless.

The Oscar winner for best foreign film In a Better World (Haevnen) is a Dutch movie by director Susanne Bier. It is the story of two men, Anton and Claus. Anton (Mikael Persbrandt) is a doctor at an African refugee camp whose marriage is on the rocks; whilst Claus (Ulrich Thomsen) is a recently widowed businessman who finds his son Christian is unable to deal with the loss of his mother and becomes angry and isolated. At school Christian befriends another boy Elias who happens to be Anton’s son.

Elias too is troubled, and is badly bullied at school, his new friendship with Christian leads to a rather upsetting act of vengeance against the bullies.

Through the film Anton and Claus find that their lives, although only loosely connected, follow a similar pattern, their individual experiences creating a mutual symmetry that Bier presents beautifully on screen. The movie is strangely uplifting yet simultaneously troubling; where Christian and Elias succeed in standing up to their bullying classmate; their fathers find themselves faced with similar problems that are far more complex and harder to unravel in the adult world.

The film is excellently made and the acting is terrific, however the plot is a little predictable and you can’t help but feel forcibly manipulated by the narrative rather than genuinely moved.