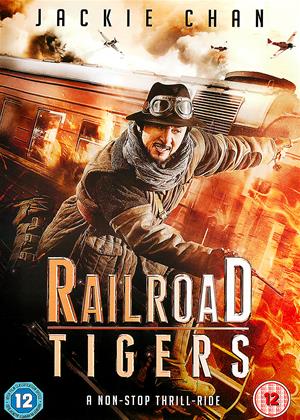 Railroad Tigers is a character-driven comedy with sprinkles of some Chinese war history (mostly involving the Japanese as their enemy), slapstick humour, and a distinctive cast of both actors and their respective characters which results in the most fun I’ve had in ages. Again, and I can’t stress this out more: this film excels in its strong character design, typical for the majority of anime despite being mostly a Chinese production. Which makes Railroad Tigers that much more interesting to experience at the big screen. In short, this film is fun, explosive, and features a questionable CGI that would’ve probably been better off without.

The film features some of China’s biggest stars to ever populate the silver screen, including living legend Jackie Chan as Ma Yuan, heartthrob Zitao Huang playing Dahai, the eternally young Kai Wang as Fan Chuan, charming Fan Xu playing Auntie Qin, and comedic genius Ping Sang as the voluminous (in a good sense) Dakui. All of these peculiar folks come together to disrupt the Japanese rule in a high-speed moving train while a bigger revolution is brewing in the background. To this extent, Railroad Tigers features an abundance of explosions and colorful pyrotechnic, rapid pace, great flow, and great sound design. Where this film falters is the visual effect department, which is not a grave error considering the other positive aspects of the film (and there are plenty).

Major plot points of the film revolve around (SPOILER ALERT) a strategically important bridge (a la River Kwai) that the protagonists are trying to blow up in order to stop Japanese goods and resources from getting into the northern parts of China. During which, there’s an incredible amount of slapstick, impossible and dire events into which the characters constantly fall in and get out hanging by as little as minuscule threads, and other shenanigans that make Railroad Tigers that more fun.

In continuation, Railroad Tigers (which is a western I might add) would be less of an experience if not for the dangerous Japanese antagonists in the form of a dangerous and determined female investigator and a brutal male soldier who aren’t fooled by Jackie & team’s antics. Once again, the sheer determination and will of these railroad men keep them from falling into the hands of the enemy. Also, while not quite fully fleshed out, some of these characters (a noodle shop owner for instance) are very interesting and could possibly bring the audience back for a second try somewhere in the near future.

Finally, the epic war comedy (is there such a thing?) Railroad Tigers is an explosive combination of intense action, likeable characters, humorous doings, and a touch of the ole western that somehow manages to entertain from start to finish, without as much as a speck of a dull spot anywhere in-between its running time. For its sheer entertainment factor, I give this movie Adrijan’s staple of approval, covering multiple viewings in a given year.