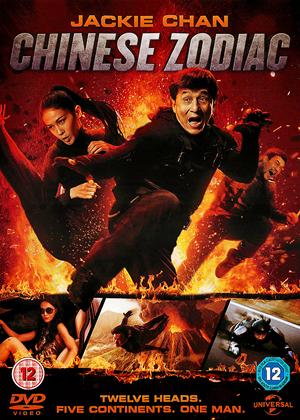 I honestly don’t know what to say about Chinese Zodiac beyond the fact that if there is a discernible plot beyond tracking down artifacts I didn’t see it. Not only does the film never quite attempt to make audiences understand why the group are looking for the artifacts but it never connects you to the characters in a way that could possibly make you care.

Chinese Zodiac follows Asian Hawk (Jackie Chan) and his group of adventurers as they hunt down 12 bronze heads of Chinese Zodiac animals that were lost all across the world. On their journey they must face many troubles that will force them to fight, run and struggle to the finish line as Hawk must guide his team through various different troubles.

Much like every Jackie Chan film, Chinese Zodiac features some awe inspiring action sequences that seem almost impossible to pull off unless you have seen The Raid. Then again action alone does not a movie make and while Chan is still capable of the physical the film is so incoherent that even he cannot understand what is taking place making Hawk a remarkably confusing character, one who cannot even justify in his own head why he is doing this outlandish mission.

Despite the inconsistent way the movie is structured and the truly idiotic script its impressive to think that Chan, at 60 has managed to create an action film like this and for that alone, Chinese Zodiac is worthy of watching but for all intent and purpose this is poor filmmaking that never coheres and lacks the kind of flow to provide entertainment beyond the visual splendor of the fights and chase scenes. I mean it makes more sense than Who Am I ever did but Chan has been known to do better and should do better, especially this far into his career