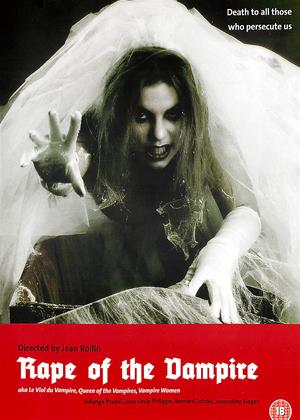 Reviews (1) of Rape of the Vampire

Mild spoilers follow ... - Rape of the Vampire review by NP

‘In my big glass palace, the sun shines freely

And at night the pale moon shines its soft light

Princess, my beloved princess, a kind gentleman said to me,

Your face is a cameo, with your beautiful dewy eyes.’

This is French film director Jean Rollin’s first feature film. It was released at a time of local political unrest, and was one of only a few films available. As such, it drew large audiences who were often angry and scathing at the unconventional nature of the story-telling.

A lot of the back-story is initially conveyed by narration. The four sisters who are convinced they are vampires are suitably seductive and other-worldly, and the three who travel from Paris to ‘cure’ them of their perceived illness are, by contrast, very ordinary. No professional actors were used for budgetary reasons.

Typical Rollin flourishes are here from the outset: it takes less than three minutes for a young topless girl to be seduced, for example. In a scene where the character of Brigitte is stumbling across an open field, there are glimpses of the real world – society, industry – in the distance, but always out of reach, always on the periphery. The events are firmly rooted in a heightened reality, cocooned almost by the unreality of the world of the vampires. This is a theme prevalent in many Rollin pictures.

Denying a Rollin film colour is stripping it of one of his most defining hallmarks, but monochrome nevertheless gives his usual flair for imagery starker, more desolate tones far removed from the comparative ‘comfort’ of his love for rich palettes. The dilapidated buildings look colder, the skeleton trees in the woodland look starker.

It isn’t until act two (the film was originally intended to be a short, before but another chapter was added so that it could be released as a full-length film) that we see the first glimpses of ‘Rollin beach’ (Pourville-lès-Dieppe) which would feature in many future productions. It is this location in particular that Rollin favoured as it left a haunting impression on him as a child, and that eagerness to lend a child’s view impression on his projects is what makes them so appealing to fans of ‘personal’ films. The filming here always takes place in the cold months, under grey, heavy skies – in black and white, it looks very barren indeed. A perfect location for the arrival of the vampire queen (Jacqueline Sieger). Sieger’s acting is very theatrical, but there is no denying she brings an extreme and exotic nature to her character that sets her apart from the others.

The chaotic jazzy/violin soundtrack is used to both work for and against the unsettling mood: ‘against’ because it seems so inappropriate, and ‘for’ because that very jarring quality makes even straightforward scenes unnerving.

The vampire fangs are achieved more successfully here than in probably any other Rollin film. More subtle than usual, they are located on the teeth outside the incisors.