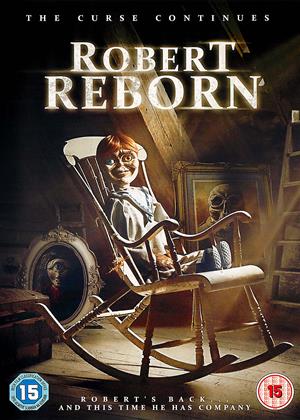 Anybody still tuned in besides me? - Robert Reborn review by ER

Man so many filmmakers are playing with dollies these days. The mini homunculous who looks like Willem Dafoe has returned to wreak havoc in slow motion alongside Lee Bane's Toymaker. These films are notable for their lack of special FX, suspense, good acting or anything to reason to recommend them. Probably the worst in the cycle so far but that's very feint praise. You could watch it to laugh at the bad Russian accents and Lee Bane's really hilarious old man make up. This is low-budget filmmaking at its worst. Cheap and terrible. But 5 films in and Robert is still going strong. Someone out there must be watching these.

Andrew Jones’ prolific North Bank Entertainment dishes out another in the successful series featuring Robert the Doll. As with the previous couple of instalments his fictional creator, The Toymaker, has become a central character. It isn’t a great decision: Lee Bane is a mainstay of Jones’ productions and often turns in fine performances, but once again, he is buried under ‘old man’ make-up from which no-one could make much of an impression. The Toymaker’s look has been toned down, admittedly, but the character remains visually unimpressive and often absurd. Knowingly though, there is a thin line of dark humour present that invites the audience not to take things too seriously.

This is very much part of a series: there is little effort to explain any previous plot developments in the hope of converting those unfamiliar with Robert’s back-story. Events occur, but very little story seems to take place for a long while. Robert himself makes fleeting head-and-shoulders appearances (as do his friends, Cyclops and Kalashnikov), and any venue, whether it be theatre of public house, is noticeably free of people.

‘Robert Reborn’ is the fifth in the film series, and it appears to be the concluding chapter in wat has become the prequel trilogy (this is set in 1951). I’m not massively sorry about this. Robert’s origins could have made quite a pacey and entertaining story, but three films is stretching the idea beyond breaking point. And yet, this opened at #1 in HMV’s DVD Premier Chart, so it appears others are more enamoured of the little fellow’s beginnings than me.

I still think there’s mileage in the story. Images of a toy-room festooned with sightless, grinning mannequins will never not be creepy, and Jones’ productions have always bounced back despite occasionally uninspiring decisions.

‘Robert Reborn’ isn’t a bad film (the scenes aboard a plane heading for Moscow), but it exposes many weaknesses of a low-budget production without bringing anything particularly inspiring to the table this time around. My score is 5 out of 10.