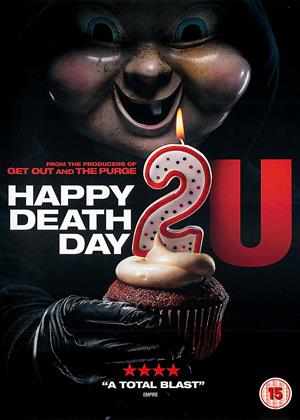 The second films formula is basically the original, with the main character forced to relive their birthday, (like Groundhog Day), which ends with her being killed. The sequel tries to vary the formula by introducing a second version of reality into the time loop, and it all gets very repetitive very quickly, with special emphasis on unfunny adolescent humour. Waiting for the killer (the doctor/ biology teacher and his wife) to be unmasked was long and drawn out. It was a painful watch and I was glad to it was over. I wouldn't say it was the worst film, but certainly not the best universal has released. I couldn't rewatch it and even with the disappointing box office sales, Universal will probably greenlight a third film. Awful acting, dreadful plot, and was just one of the one of the worst films I've have rented from cinema Paradiso(the worst was butterfly Effect 2).

1/5 from me and sorry for any spoilers.

Happy Death Day 2U does a few things very right straight away: - it leans into the utter absurdity of the original concept, keeping the level of snarky dialogue and comedy high.

It also makes much more use of Phi Vu's 'Ryan' - last seen only as a slacker roommate with a talent for embarrassing questions, but now given a fleshed out role as a slacker brainiac which makes full use of his comic timing. Indeed, refreshingly for a world in which diversity has been lacking in movies, the talented Vu is the one who starts the movie front and centre as the character in the grip of a time loop.

Jessica Rothe is back as 'Tree', and soon resumes a very enjoyable kind of 'lead' role amidst the ensemble, ably accompanied by the highly likeable Israel Broussard as 'Carter'.

To discuss the bonkers plot would spoil it, so I'll simply say that the inventiveness of the original movie is stepped up a notch, and the gruesome deaths and comedy increase too, giving us a pacy high-stakes plot that is immensely good value and highly entertaining.

It's hard to say whether this is a sequel that betters the original, but it certainly presses all of the right buttons for an enjoyable experience.

If your a fan of films like groundhog day and back to the future then im sure you will enjoy this.

I love both the first happy death day and this sequel.

If you haven't seen the first film the definitely watch that before this one as they tie together.

This sequel keeps the same idea but adds more to it to stop it been a copy of the first.

If you enjoyed the first film then you will definitely have a good time with this sequel. it is a shame that they felt the need to explain why the time loop was occurring from the first film, it doesn't male any sense but it has enough humour to keep you interested until the end.

The formula is as per the entertaining original, with our heroine forced to relive the birthday, Groundhog Day style, which ends with her being killed. The sequel tries to vary the formula by introducing a second version of reality into the time loop, but it all gets a bit repetitive, with more emphasis than before on unfunny adolescent high school humour. Waiting for the killer to pounce again soon palls and even worse – pass the sick bag – our heroine learns some life lessons, complete with plinky-plonk piano soundtrack.

Stupid, but fun for a one time viewing - Happy Death Day 2U review by AL

Stupid, no horror, no gore, a story you have seen before in the original, wow sounds awesome doesn't it!!

Well actually it's pretty entertaining, nothing awesome, but worthy of a one time viewing.

I thought this film might be "more of the same" but it managed to be different enough to be really entertaining.  Recommended.

Jessica Rothe is undeniably the star of the Happy Death Day saga, more so than the baby-masked killer. She’s the most relatable and fun in how she takes a precise pin to poke holes in the horror mystery concept. Here, once again, she has her relatable moments but the most relatable by far is her muttering upon another day of reliving the same events; “I am so done with this.”

It’s a shame that Happy Death Day 2U wastes so much potential it has with such a concept. The first film had its clever appeal of Rothe playing college student Tree who has to relive the same day over and over until she can find her killer. Not a bad story. But the sequel shoots itself twice in the foot. For starters, it attempts to give a firm explanation as to why Tree kept reliving the same day and it wasn’t some killer’s curse. It’s a time travel device constructed by science students too smart for their own good. Like the big reveal of the Highlanders being aliens in The Quickening, it's an explanation that is not only unneeded but kinda ruins the mystique of the whole concept.

That being said, the story does start with an interesting idea. Instead of Tree experience the same day over and over, now it’s science student Ryan to solve the case of a new murder. Now here’s a movie. Ryan slowly starts to realize he’s trapped in a time loop and needs to rely on Tree’s expertise in this area of foiling the new baby-masked killer. Intriguing. But if that’s the movie you’re hoping for, tagged with a surprising twist about who his true killer really is, you can flush those hopes down the drain right away.

Due to time-travel nonsense, Tree is once more trapped in the same day as the first movie. Except this time there are certain trade-offs. Her boyfriend is now sleeping with her rival. Her dead mother is alive and well. And there’s a brand new killer on the loose. But with the time travel logic about Tree’s situation now known, who really cares about solving the murder mystery? It’s such a secondary aspect of the plot that every time this aspect comes up in her dimension-shifting jargon it feels tacked on. As if to say, “Oh, that’s who the killer was. That’s...neat, I guess.”

Where the film could have picked up steam was in its over-the-top nature of death and repetition of the same day again. But just as with Tree, the mounting deaths take their toll. It’s not that Tree skydiving without a parachute or taking a big swig of drain cleaner in a grocery store isn’t darkly funny. But it needs more of that. It needs a lot more of that dark charm to push through the jumbled logic and be more entertaining than confounding. Because the other gags the film offers come off with all the cartoonish stumbling of a forgettable 1980s teen comedy. It is 2019 and we have a gag where an amateur drama student dresses up as a damsel French stereotype to distract a campus official into losing track of his keys. And it works!

While the first Happy Death Day at least had a creative enough assembly, its sequel goes so far off the rails it's in another county. But for being so ludicrous, it still struggles with all its might to push that hilarity, pulling out nearly every dated gag I thought had been doomed to kid sitcoms where they would remain buried. Here they are unearthed in all their tacky glory, reminding us all why they were retired in the first place. And the surprise ending is so far overblown with tired lunacy and absurdity that the third film being planned could very well make for one of the most bizarre trainwrecks horror trilogies of all-time.