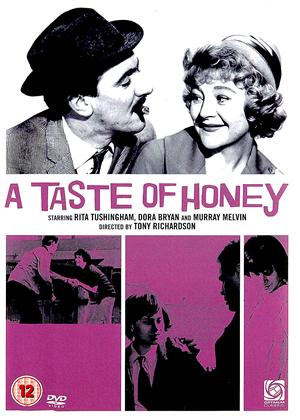 Synopsis:
Jo (Rita Tushingham) is an awkward, shy 17-year-old girl living with her promiscuous alcoholic mother, Helen (Dora Bryan) in the grey, bleak, tenement houses of Manchester. Desperately longing to simply be loved, when her mother's latest boyfriend drives Jo out of their apartment she spends the night with a black sailor on a brief shore leave. When Jo's mother abandons her to move in with her latest lover, Jo finds a job and a room for herself. Then Geoffrey (Murray Melvin) drifts into her world, a shy and lonely homosexual, with whom she agrees to share her flat.
When Jo discovers that she is pregnant with the sailor's child, Geoffrey, Grateful for her friendship, looks after her, even offering marriage. But their brief taste of happiness is short-lived for Jo's fickle and domineering mother wants to be part of the picture.
Actors:
Rita Tushingham, Robert Stephens, Dora Bryan, Murray Melvin, Paul Danquah, Michael Bilton, Eunice Black, David Boliver, Margo Cunningham, A. Goodman, John Harrison, Veronica Howard, Moira Kaye, Graham Roberts, Valerie Skardon, Herbert Smith, Rosalie Williams, Jack Yarker, Hazel Blears, Shelagh Delaney
Directors:
Tony Richardson
Producers:
Tony Richardson
Writers:
Shelagh Delaney, Tony Richardson
Studio:
Optimum
Genres:
British Films, Classics, Drama, Lesbian & Gay
Countries:
UK
Awards:

Reviews (3) of A Taste of Honey

An authentic, gritty slice of a life perhaps now gone - A Taste of Honey review by RP

From the stage play of the same name by 18 year old Sheelagh Delaney with the author writing the screenplay for the film and directed by Tony Richardson, this is a superb example of the 'British New Wave' / 'social realism' / 'kitchen sink' dramas of the late 1950s / early 1960s.

Set in Salford, it tells the story of a schoolgirl (Jo, played by Rita Tushingham) who lives with her mother (Helen, played by Dora Bryan). Jo meets a young black seaman and falls pregnant. Mother leaves to marry her fancy man. Jo leaves school, goes to work in a shoe shop, meets a gay man, finds a cheap run-down room, and allows the gay man (Geoffrey, played by Murray Melvin) to live there. Mother returns, her new marriage having failed, and muscles Jo's friend out...

So far, so grim. What sets this apart is not only the context (in 1961 it was almost unheard of for a film to mention mixed race relationships, let alone pregnant schoolgirls and homosexuality), the fact that the film was made on location, the period details (Manchester Ship Canal with shipping, cobbled streets, children playing in the streets, playground songs, clothes, school uniform, boys in short trousers, dancing, outings to Blackpool etc), and of course the quality of the acting. Dora Bryan was an established performer and Murray Melvin had the same part in the stage production, but Rita Tushingham was a newcomer.

The accents too are in keeping (Dora Bryan grew up in Oldham, Rita Tushingham is from Liverpool) unlike many similar films where dodgy accents abound.

The film won four BAFTAs – Best Screenplay, Best Actress (Dora Bryan) and Best Newcomer (Rita Tushingham) – as well as assorted other awards. It thoroughly deserved them, and while it is a little 'stagey' (it was after all derived from a stage play) and somewhat dated, it still feels like an authentic, gritty slice of a life perhaps now gone, but not far away... Highly recommended – 5/5 stars.

I think A Taste of Honey is easily Tony Richardson's best film. It was shot around Salford, and the location work feels authentic, and Rita Tushingham scores with an artless portrayal of a sixteen year old girl unexpectedly faced with pregnancy and motherhood. But I don't think of this film as part of the working class cycle that characterised the British new wave. Those characters are usually taking advantage of a trickle down of opportunity and prosperity, and imparting a new, unfamiliar vernacular. A Taste of Honey is about people that economic upturns never reach, the poor and the uneducated, rather than being a new idea about the proletariat. It has more in common with the films of the depression, like Love on the Dole (1941) though with a lighter touch, greater humour and free from ideology. What I most like about the film, is the poetry in Shelagh Delaney's lines that describe her protagonist's confusion and fear: it's not the darkness outside that scares me... It is a remarkable script from Delaney, written when she was only nineteen and it is her work that makes the film so special.

A joy to see this again! - A Taste of Honey review by TE

The two previous reviewers have summed up the best aspects of this excellent Tony Richardson classic.

The blu-ray disc contains an enjoyable and informative Q & A with Rita Tushingham and Murray Melvin, plus other useful extras.

One of the most interesting aspects from the vantage point of 2020, nearly sixty years since the film was released, is the comparison between Shelagh Delaney's script and the work of the male writers of British films in the late 1950s and early 1960s. The gender issues, along with race and homophobia, are much more in the foreground than in any other UK films of the period. There's a case for saying that Delaney's original stage text was a little more daring than the film version.

Above all the film is carried along by a restless energy and a growing sense that this is a story that will not have a happy ending, and the film is all the better for that.