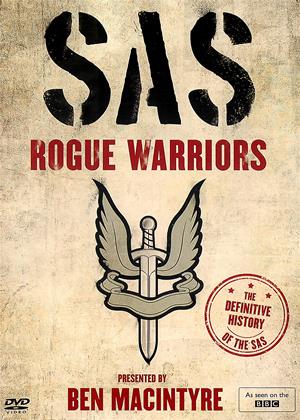 Synopsis:
Today, the Special Air Service is the world's most famous combat unit with the motto 'Who Dares Wins' but the story of how it came into existence has been, until now, a closely guarded secret. For the first time, the SAS has agreed to open up its archive and allow Ben Macintyre to reveal the true story of their formation during the darkest days of World War Two. With unprecedented access to the SAS secret files, unseen footage and exclusive interviews with its founder members, this series tells the remarkable story behind an extraordinary fighting force.
Actors:
Ben Macintyre
Directors:
Matthew Whiteman
Producers:
Matthew Whiteman, Eamon Hardy
Narrated By:
Ben Macintyre
Aka:
SAS Origins: A Secret History
Studio:
Dazzler
Genres:
British TV, TV Documentaries

SAS: Rogue Warriors is a poignant, nail-biting, and thrilling depiction of the early SAS military regiments as told trough the collected notes and old footage of none other than famous British journalist Ben Macintyre; and Macintyre surely knows how to make a documentary without coloring the narrative with incidental overtly left or right-leaning ideologies (which is a huge positive in this day and age). Funny enough, this film would’ve probably become a great sore in the eye of SAS founder David Stirling if he was there to see it, since it gives up everything the early SAS stood for: no bragging, no boasting, and only keeping your thoughts to yourself. Thus, the sole idea of a documentary would’ve been unthinkable for this man and would’ve probably been deemed as treason of the highest order. Thankfully, time has made its due, and so SAS: Rogue Warriors still managed to see the light of day.

As said, the series follow the SAS regimen in North Africa 1941, where a 26-year-old David Stirling came up with the idea to train a special unit of raiders who would do hit-and-runs and disappear into the hot African sand afterwards. He voiced this idea to John “Jock” Lewes, and together they “gave birth” to what’s known today as the Special Air Service or simply SAS in short.

This film is full with 007 moments, to which Bond himself would shrug at the sole notion of performing such daunting tasks with such scarce equipment and questionable logistics; in it, we’re witnessing terrifying parachute drops, disorganized night raids in Nazi camps, fuses, crackers, and explosions, demanding marches through the hot and golden sands, sabotage missions where the SAS recruits escape by a thread, and drinking contests that could possibly give away the group’s position and render the whole project obsolete. Here is where a lesser director would’ve stumbled upon their movie’s own weight, but not Macintyre though; his meticulous research, combined with the colorful narrative flow of the experience makes for a remarkable viewing even for those previously uninformed about the SAS group. What’s more important however is Macintyre decision to showcase the grey moral ground upon which these military operations took place. After all, it’s already 75+ years since their forming, so uncovering some bitter truths shouldn’t affect anyone that had a saying in the matter back in the WWII day.

With that being said, SAS: Rogue Warriors is a very peculiar blend of macho heroism and romanticized warfare in T. E. Lawrence style; in fact, the sole impulsiveness of the men have led to some gruesome scenes where, amidst the chaos of war, all common sense was abandoned to bring an underlying sociopathic culture to pass. After all, the SAS men were not some people you could’ve negotiate with.

Finally, the history buffs out there should consider this a binge-watching must; everyone else, feel free to enjoy it at your own leisure.