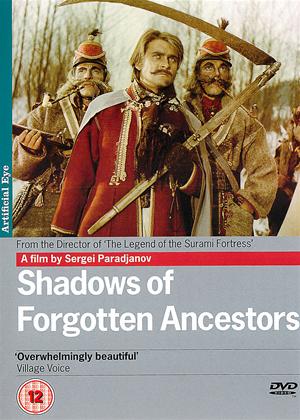 Reviews (2) of Shadows of Forgotten Ancestors

How much folklore can you take in one night? - Shadows of Forgotten Ancestors review by PR

Everybody else raves on about it, so I must be missing something because, although I did admire some aspects of this film, I found it rather disappointing. Yes, it is unusual. Yes, it is well done. Yes, I see why many would regard it as a work or art. But at times I found it almost embarrassing. Too many peasants being folkloric in interesting outfits and singing repetitive local songs. And the story is hardly novel. But don't take my word for it, borrow it and decide for yourself, the very least you'll get are lots of scenes of anthropological interest.

From Romance to Ritual - Shadows of Forgotten Ancestors review by CH

Critics are in the habit of affecting omniscience. Better, though, to say that one is coming to something fresh (“admit” would denote needless shame: none of us can claim to have seen everything: life lays tosh across one's path as well as masterpieces). This is the first film by Sergei Parajanov that I have seen (he died, at sixty-six, three decades ago), and it is one which brings immersion from the opening moments.

We are in nineteenth-century Ukraine, in the countryside, against the Carpathian mountains, where folk song is to the fore on the soundtrack and animals stroll to and fro, seemingly oblivious to the fact that the director must be hoping they do not lurch out of shot. The thrust of the story is that Ivan Mikolaychuk is in love with the daughter of a neighbouring landowner, a man of dubious worth, and the tragedy is that she dies, her spirit suffusing everything which happens afterwards.

This, though, is not a film which one watches for that drama as such; it is suffused with the spirit of place, a way of filming which it would be lazy to call “painterly”; in traversing folklore, ritual - the very facts of life and death -. it says something, while switching between colour and black and white, about human survival. As such, in these times, it invites, even obliges one to watch it again before saying any more.